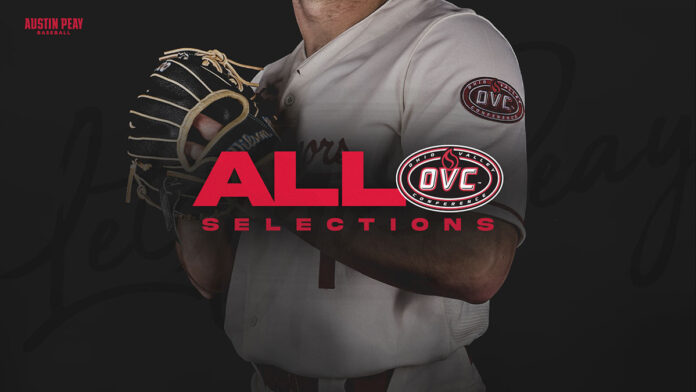 Alexander followed up his Preseason All-OVC nod by earning First-Team All-OVC honors. He is the first Austin Peay State University catcher to earn first-team recognition since A.J. Ellis was a first-team honoree in both the 2002 and 2003 seasons. Avros, an OVC All-Tournament honoree last season, built on his junior campaign by earning Second Team All-OVC recognition.

Alexander, of Benton, Missouri, put together one of the finest seasons by an Austin Peay State University catcher. Offensively, he led the Govs’ regulars in batting average (.348), slugging percentage (.642), and on-base percentage (.428) at regular season’s end. He also led APSU in home runs (13), RBI (54), and walks (27) while finishing second in doubles (19).

Avros, of Clarksville, again proved indispensable to the Governors as a utility player. He started at four different positions in 2022 – left field, right field, catcher, and second base. Avros’ start at second base against Southern Illinois, on April 19th, gave him a start at six different positions during his Austin Peay State University career.

One of only two APSU Governors to play all 55 games during the regular season, Avros recorded his 200th collegiate hit in the regular-season finale, Saturday, against Morehead State. He was second on the team with a .308 batting average in 2022 and led the team with 24 doubles, 33 walks, and 51 runs scored. Avros’ 24 doubles also led the OVC and ranked fifth among all Division I hitters.

Clarksville-native Barksdale earned All-Freshman recognition after seeing action in 33 games, including four starts, during his first season with the Governors. His first collegiate home run was key in the Governors’ April 10th victory at UT Martin, the three-run blast providing the game-securing runs.

Rogers, of Sparks, Nevada, appeared in 26 games and started eight games as an Austin Peay rookie. He went 2-for-2 against Evansville, on March 16th, for his first career multi-hit outing. Rogers had back-to-back games with an extra-base hit late in the season with a double at Bellarmine and a double two days later at Toledo.


Weaver, of Fruita, Colorado, made 25 appearances in his freshman season, ranking among Division I’s Top 100 in appearances at the regular season’s end. He posted a 2-4 record with 32 strikeouts during the season. Weaver picked up his wins in a relief appearance against Southeast Missouri, on April 2nd, and in relief against Southern Illinois, on April 19th.