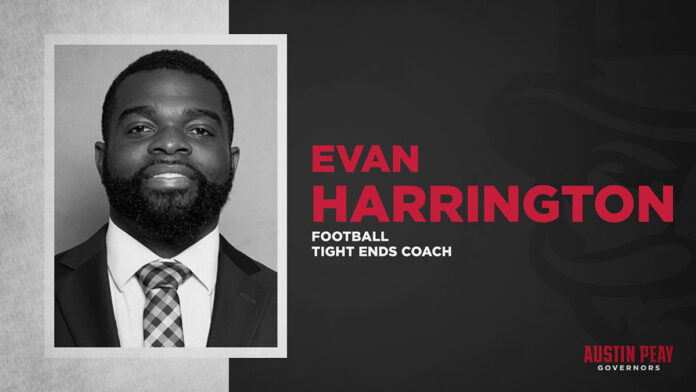 “I am really excited to have Evan and his family join us here in Stacheville,” said Walden. “Evan came highly recommend throughout the interview process from some of the top coaches at the NFL and collegiate level. With his experience both playing and coaching at the NFL level, I knew would benefit our players.

“It was evident early in the interview process that Coach Harrington not only had a great knowledge base of the game, but he understands how to relate to players. I think his energy will be infectious and our players will be able to learn from a guy who has seen it and done it at the highest level!”

Most recently, Harrington served as the tight ends coach at North Carolina Central during the 2021 season. Under Harrington’s tutelage, redshirt senior tight end Isiah Macklin earned Third Team All-Mid-Eastern Athletic Conference and was selected to play in the 2022 HBCU Legacy Bowl after finishing fourth on the team with 16 receptions for 201 yards and a touchdown. Redshirt senior tight end Quentin Chaplin also hauled in his first touchdown as an Eagle during Harrington’s lone season in Durham, North Carolina.

“I am very excited Coach Walden has given my family and I the opportunity to join the Stacheville family,” said Harrington. “Coach Walden’s energy, knowledge, and focus are contagious and I am excited to contribute to the foundation that he and the staff have built here.”

As the assistant director of player engagement, Harrington was responsible for helping guide the development and education of players as it pertains to both their personal and professional lives, and assisting rookie classes with acclimating themselves to the life of the NFL.

Before his time in the nation’s capital, Harrington worked in Zürich, Switzerland as the European Regional Director of the American Flag Football League (2018-19) and the Level Up Camp Director for Europe’s Elite (2017-19) – the leading sports news source covering youth/prep athletes in Europe and Australia.

At Europe’s Elite, Harrington was responsible for the Wilson Level Up Summer Camp, which is the largest American football camp outside of the United States and featured over 350 campers from over 20 countries.

In 2018, Harrington was the running backs coach and run game coordinator at Independence Community College in Independence, Kansas – the team was featured on the 2019 Netflix show Last Chance U.


During Harrington’s first stint across the pond, he served as the head coach of the Winterthur Warriors, 2015-18, in the Swiss Football League after playing running back and linebacker for the Frankfurt Galaxy, 2015, and the Basel Gladiators, 2014.

In 2011, Harrington played fullback for the Edmonton Eskimo Football Club in the Canadian Football League after competing for a roster spot with the San Diego Chargers. Harrington spent the first two seasons of his collegiate career as a linebacker at the College of the Canyons before playing two seasons at Colorado as a linebacker and a fullback.