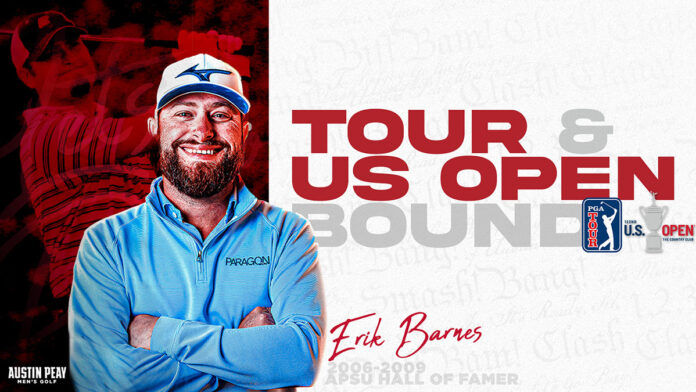 Clarksville, TN – It’s been quite a week for former Austin Peay State University (APSU) men’s golf standout and APSU Hall of Famer Erik Barnes, earning his PGA Tour card and qualifying to play in the 2022 U.S. Open, June 16th-19th at The Country Club in Brookline, Massachusetts.

Barnes has competed in 14 events on the Korn Ferry Tour this season, making the cut in each event. For his performances, Barnes crossed the 875-point, fail-safe threshold to secure his first PGA Tour card. Barnes has been a consistent presence on the Korn Ferry Tour, compiling 18 top-10 finishes in 165 cumulative starts, including three runner-up showings.

His talents on the Korn Ferry Tour not only secured Barnes a PGA Tour card but a spot in one of the premier major tournaments on the PGA Tour, the U.S. Open. Barnes shot six-under at the qualifying event at the Ansley Golf Club in Roswell, Georgia, to secure one of four qualifying spots for the U.S. Open. The 2022 U.S. Open will be played, June 16th-19th at The Country Club in Brookline, Mass.

Barnes’ journey has been one of perseverance. After spending time on smaller tours, he earned Korn Ferry Tour membership via 2014 Q-School. Barnes rose quickly through the ranks before COVID-19 put the Korn Ferry tour on hiatus. Once again, Barnes showed perseverance, taking a job as a Grocery Replenishment Specialist at his local Publix supermarket.  Click here to learn more about Barnes’ journey to his first PGA Tour card.

Barnes played at Austin Peay State University from 2006-09 and was inducted into the APSU Hall of Fame in 2018. As a freshman, he averaged 72.6 strokes per round (third lowest all-time at the time) and was named Second Team All-OVC, OVC Freshman Golfer of the Year, and to the OVC All-Newcomer team. In his junior campaign, Barnes set APSU records for low 18-, 36- and 54-hole scores.

In 2009, Barnes helped lead Austin Peay State University to the OVC Championship after rallying from nine shots down to capture the league title by one stroke (877) over rival Murray State. Barnes was named First Team All-OVC and became the sixth Governor to earn OVC Golfer of the Year honors.