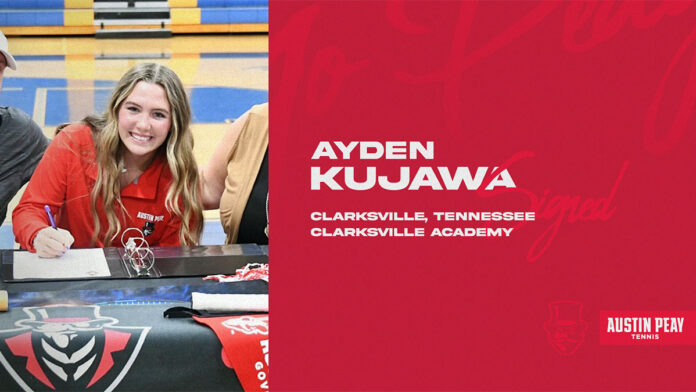 A three-time district and regional champion, Kujawa has had an impressive prep career under head coach Terry Ray.

After winning the Division II-A District 4 and Region Tournament Championship in 2019, Kujawa became the first Lady Cougar to appear in the state’s singles tournament since 1997, placing third in her freshman campaign.

Kujawa also was the Leaf Chronicle’s 2021 All-Area Girl’s Player of the Year as a junior in 2021.

This season, Kujawa claimed her third-straight district and regional title and advanced to the semifinals of the state tournament for the third time in as many opportunities.

A regular in local and regional rankings, Kujawa ranked third in Tennessee for Girls’ 16’s and under and seventh in 18’s and under. Kujawa finished her high school career ranked as the No. 7 player in Tennessee and has a national ranking of 334 according to tennisrecruiting.net.

“We are very excited to have Ayden join our team this fall,” Brown said. “To have a local girl that can not only play, but contribute significantly on and off court is really promising to Maria [Sorbello Morrison, associate head coach] and myself. She is a delightful young lady that I feel has been challenged with her tennis, by not having regular solid practice partners year-round.

“With the level of tennis Ayden will be exposed to here and the more intense practices, we are looking to see her improve dramatically. Her father Kurt Kujawa has been a volunteer assistant for us a number of years and has played a big role in our successes. Maria and I are extremely pleased Ayden chose Austin Peay State University and she will fit into our culture and the Total Gov Concept.”

Academically, Kujawa has been a member of CA’s National Honor Society for four years and serves an officer for the Fellowship of Christian Athletes (FCA).

Kujawa is the first Clarksville native for the Governors since Brittney Covington (2014-18), a fellow Clarksville Academy graduate.