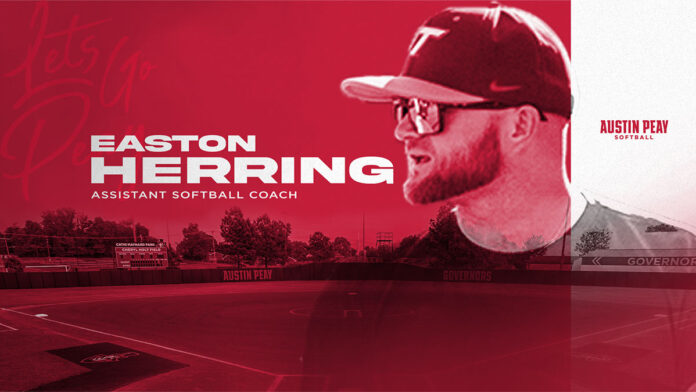 “Easton is going to be a great addition to our program,” Stanfill said. “With his time spent at Virginia Tech this past season and his years spent at Wichita State, he is eager to share his knowledge and passion for the game. We welcome him and his wife, Tara to our big Gov family.”

Herring served as a catching and outfield coordinator for the nationally ranked Hokies last season, where he was also a first base coach and charged with developing scouting reports for the Top-10 ranked Hokies. Virginia Tech finished last season with a 46-10 record, including 14 wins over Top-25 ranked opponents, and hosted both an NCAA Regional and Super Regional.

Before his time at Virginia Tech, Herring spent one season as a volunteer assistant coach for the Wichita State baseball program where he was the catching and outfield coordinator and assisted with both with the Shockers hitting and defense as well. Herring helped guide the Shockers to a 31-23 overall record and 18-13 mark in the American Athletic Conference, with the conference win total being a program-record.

A native of Pratt, Kansas, Herring was a graduate manager for WSU from 2018-2020 before being elevated to volunteer assistant coach.

Prior to arriving at Wichita State in 2018, he attended and played two seasons of baseball at Newman University in Wichita.

He graduated with a bachelor’s degree in elementary education from Newman in December 2018 and received his master’s degree in sport management from Wichita State in May 2020.

Herring also served as the head coach for the Hutchinson Monarchs in the summer of 2020 in the Sunflower Collegiate League and helped lead the team to a third-place finish in the NBC World Series – the highest finish in team history – and their first SCL league championship with a 32-8 overall record.