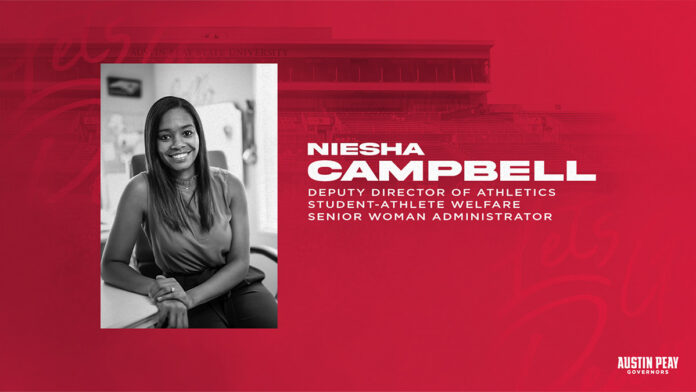 Campbell brings eight years of athletics experience at Duke prior to her role in Clarksville. She began her career with the Blue Devils’ as associate director of compliance before moving into roles as director of human resources, director of Duke athletics’ annual fund, and ultimately as director of the Iron Dukes Major Gifts.

“I am excited to welcome Niesha and her entire family to Stacheville,” said Harrison. “Niesha was a highly valued part of our team during my time at Duke and I am confident that her skill set will help us as we continue to level up. Her background in fiscal management, compliance, human resources, and fundraising will be a benefit to our administration, staff, and most importantly our student athletes”

“I am grateful for the opportunity to join the amazing community of coaches, administrators, staff, and student-athletes at Austin Peay,” said Campbell. “My family and I are beyond excited to be Governors.”

As Duke’s director of major gifts, Campbell created, launched, and directed the Duke Athletics Women’s Impact Network which engaged and cultivated gifts from the department’s female donors. Through her efforts, she closed on $5.8 million in philanthropic investments during her tenure, nearly 10 percent of the department’s total fundraising.

Campbell also was a successful leader of the department’s athletic development arm prior to moving into the major gifts role. The Blue Devils’ raised then-records of $14.6 million and $15.5 million in back-to-back years, 2015-16 and 2016-17, respectively. Duke was able to retain donors at an 85 percent rate during her two years as director of athletics development – a 10 percent year-to-year improvement.

As director of human resources, Campbell initiated incentives to improve morale, engagement, and productivity among the Blue Devils’ athletic staff. She also led the charge in securing sponsorships to improve those incentives while limiting the cost to the athletics department. Campbell also initiated onboarding plans and new employee orientation for new athletics hires.

At the beginning of her career, Campbell’s role of associate director of compliance saw her administer effective NCAA rules interpretation and education programs for Duke’s coaching and athletics staff, student-athletes, athletics representatives, and fans. She also was responsible for investigating and tracking allegations and violations of NCAA rules while also ensuring application of corrective action plans.

Campbell also has extensive experience outside collegiate athletes. After earning her bachelor’s degree at Appalachian State in 2006 she joined Wachovia Securities Financial Network as a senior auditor where she worked for four years before joining the Duke athletics department. The past three years she has served as director of advancement at Trinity School of Durham and Chapel Hill. While at Trinity School, she led the successful completion of that school’s campaign to secure $6.9 million in funds during the height of the COVID-19 pandemic.


After earning her bachelor’s degree at Appalachian State, Campbell continued her education earning two master’s degrees. She holds a master’s degree in divinity from Liberty, earned in 2012, and an MBA from Queens University earned in 2016. Campbell will be joined in Clarksville by her husband Kevin and daughters Kaitlyn and Aubrey.
Facebook
Twitter
Pinterest
Email
Print
Previous articleClarksville Police Department asks citizens to watch out for High Water, Flash Flooding
Next articleClarksville Police Department reports Fatal Crash on Whitfield Road at Old Trenton Road