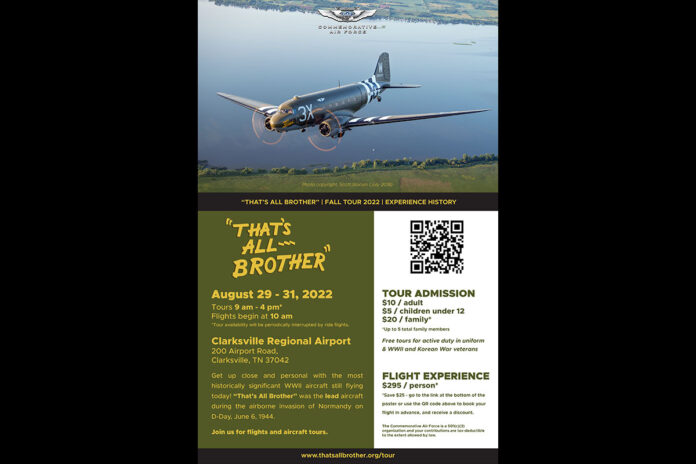 Visitors will be able to tour “That’s All, Brother”, the C-47A Skytrain troop transport that led the formation of 800 other troop transport aircraft over Normandy on D-Day 1944 and will be available to the public.

Visitors will also be able to purchase flight experiences that fly over downtown Clarksville.

The aircraft will be staged at the Clarksville Regional Airport. 200 Airport Road, Clarksville, TN 37042.

About the C-47A That’s All, Brother

(Named by its D-Day crew as message to Adolf Hitler)

“That’s All, Brother” was the C-47A troop carrier aircraft that led the Airborne Invasion on D-Day, June 6th, 1944, carrying 101st Airborne Division paratroopers into France during the D-Day invasion. During the remainder of WWII, “That’s All Brother” served in Operation Dragoon, Market Garden, the Relief of Bastogne, and Operation Varsity.

After the war, the aircraft was sold as surplus and its contribution to history almost forgotten. In 2007, it was discovered by a historian in a boneyard, destined to be scavenged for parts or converted into a more modern aircraft.

In 2015, the CAF rescued the aircraft from the boneyard and began the restoration. A successful Kickstarter campaign and subsequent fundraising campaigns raised over $3 million to fund the complete restoration of “That’s All, Brother” returning it to its D-Day configuration.


It flew for the first time since its restoration in January 2018. In June 2019, it returned to England and France for the commemoration of the 75th anniversary of D-Day (flying over Omaha Beach on June 6th, 2019), the 70th anniversary of the Berlin Airlift and was featured at the 2019 Paris Airshow. Since returning home “That’s All Brother” has been on tour throughout the USA.

About the Commemorative Air Force

Through more than six decades of collecting, and flying World War II aircraft, the CAF has become the world’s largest flying museum. Their fleet of over 170 World War II airplanes are assigned to unit locations across the U.S. and supported by 12,000 volunteer members.

Nearly all the aircraft are kept in flying condition, enabling people to experience firsthand the sight and sound of vintage military aircraft in flight. Our mission is to Educate, Inspire, and Honor through flight and living history experiences.

To learn more about the organization, visit www.CommemorativeAirForce.org