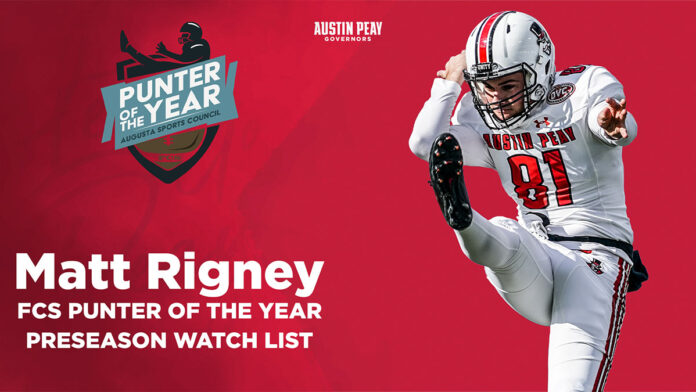 A Newcastle, Australia native, Rigney was a Second Team All-OVC selection a season ago after averaging 40.73 yards per kick – the fifth-best mark in program history – while becoming just the third APSU Gov to average 40 yards per punt in a season. Of his 55 punts during the 2021 season, Rigney had 14 downed inside the 20-yard line and had seven punts of 50-plus yards while recording just three touchbacks.

The 6-4 punter also averaged 40.84 yards per punt in OVC play, which ranked second in the conference. Rigney punted a career-high eight times against Tennessee State, October 2nd, and averaged 46.63 yards per kick with three kicks of 50-plus yards. He also launched a season-best 60-yard kick against the Tigers, marking the second 60-yard boot of his career.

After transferring to Austin Peay State University, Rigney debuted for the Governors during the spring 2021 season and immediately took over as the primary punter. Rigney punted a career-high ten times against Tennessee State (2/28/21), averaging 33.70 yards per kick while becoming the first Austin Peay State University punter with double-digit punts in a game since Ben Campbell punted 11 times against Eastern Kentucky (10/4/2014).

Rigney and the rest of the Austin Peay State University football team will kick off the season at 11:00am, August 27th against Western Kentucky in Houchens Industries-L.T. Smith Stadium in Bowling Green, Kentucky.