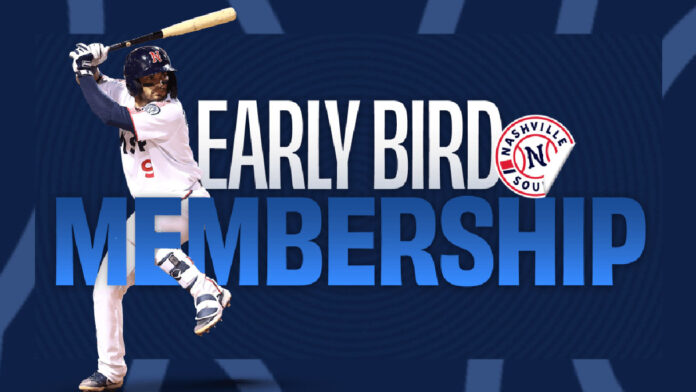 Nashville, TN – The Nashville Sounds Baseball Club announced today a variety of incentives and prizes for fans who place a deposit for a 2023 season ticket membership.

Memberships start as low as $350.00 per seat and can save fans up to 40% off day-of-game ticket prices. In addition to monetary savings, early-bird benefits for those who place a $100.00 deposit include free parking, exclusive season ticket member events and entry into each of the following drawings:

All fans who place their deposit by the early-bird deadline (Friday, September 9th at 11:59pm central time) will receive a special invitation to participate in the annual Swing for Your Seats event on Saturday, September 17th from 9:00am to Noon.

A representative for each season ticket member account will receive five (5) swings to win their 2023 season tickets for free by hitting a home run at First Horizon Park.

Members who choose to pay in full for their 2023 season ticket membership by the early-bird deadline on September 9th will receive one (1) ticket per seat on their plan to attend a 2023 Nashville Sounds road game with transportation via bus provided by the Sounds. The specific game will be determined by the Sounds upon the 2023 schedule release.


The 2023 schedule will be released at a later date.

The Nashville Sounds are the Triple-A affiliate of the Milwaukee Brewers and play at First Horizon Park. Single-game tickets are on sale now for all home games in 2022. For more information call 615.690.4487 or e-mail .