Washington, D.C. – The short days and messy weather of January are combining to keep people off the roads, lowering gasoline demand. But the price of oil rose as fears of a global economic recession eased. The national average for a gallon of gas rose by five cents since last week to $3.32.

“Gasoline demand is usually lackluster this time of year,” said Andrew Gross, AAA spokesperson, “and it likely won’t start to tick up until spring break draws near. So the primary factor in this latest increase is the higher cost of oil, which accounts for more than half of what you pay at the pump.”

Today’s national average of $3.32 is 17 cents more than a month ago and a penny more than a year ago. 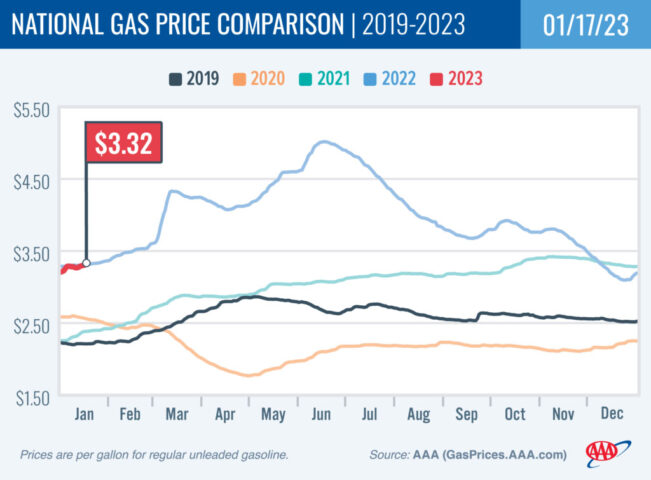 At the close of Friday’s formal trading session, WTI increased by $1.47 to settle at $79.86. A lower dollar helped to push crude prices higher at the end of last week.

Additionally, after China increased quotas for oil purchases this year, the market rallied as a sign that crude oil demand may be more robust than anticipated.

For this week, crude prices could continue to rise if the market sees more indications that global oil demand may be boosted alongside prices in 2023.