I can remember as a child how much fear I had of the word “tornado”. Like most children who grew up in the seventies, our first exposure to exactly what those terrible storms were, came from the yearly airing of “The Wizard of Oz”. I can remember a few times where tornadoes touched down near our home in the Salem community, and even one time when some shingles were blown off our roof while we were out having fun at Opryland. 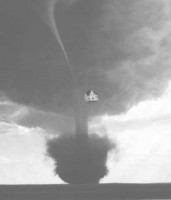 I’m not a scientist, and certainly not a meteorologist, but it seems to me that in recent years we have had to endure far more of these storms then we ever did when I was a child. Those who have lived longer than me seem to agree.

No, I don’t think it’s global warming. I think weather patterns like most things on earth run in cycles. In 1998, a powerful twister ravaged downtown and eastern Nashville. Of course every Clarksvillian remembers 1999, when historic downtown Clarksville was ripped apart by an category 5 storm that destroyed a number of historic buildings, including the old Bailey Building which once housed 54 WDXN AM, where I worked right after college. We are barraged with so many tornado watches and warnings nowadays that it’s easy to become dismissive of them.

I was at my office in Murfreesboro, when I was reminded of just how seriously we need to monitor and heed those weather warnings. I had just returned from lunch at about 12:30, the skies were starting to darken and droplets of rain were beginning to fall. I had just gotten online in order to monitor the weather, when our lights blinked once and then went out completely. Our company President gazed out at the street and noticed that cars were starting to pulling off the road. Beginning to comprehend our danger, we rushed to the safest room in the building. One of my co-workers was visibly shaken. She had just walked into her office with her lunch only to glance out the window and witness the monster twister. She called another co-worker for confirmation after dropping her lunch on the floor in horror. Other co-workers had been in restaurants and had been even closer to the storm. Everyone was unnerved to say the least. I must confess that the old newsman in me wanted to shoot some video with my camera phone and after it was clear that imminent danger was gone I went outside and surveyed the skies, but it was all over. I had heard that the Blackman area of Murfreesboro was hit hard. So the first thing I did was to make sure that a friend of mine who lived there was safe, despite the damage all around.

Most all of my co-workers make the growing town of Murfreesboro their home. Reports were starting to come in of damage to their homes and property, but it was not complete destruction. I was thankful for their safety, and hopeful that all of their families were fortunate enough to escape unharmed. We waited for a couple of hours while watching police, fire trucks and ambulances speed down North West Broad St. in front of the office. It was soon clear that we were no more than a half-mile away from likely enduring some of that devastation. As our power remained off after a couple of hours and the gravity of the situation set in, we began to leave the office. It took quite a while to get out of town and the devastation was jaw dropping. The gas station where I had stopped to buy juice Friday morning was totally destroyed. A nearby car garage had a gaping hole in the roof and then business across the street was smashed to the point it was hard to tell what sort of business it had been. As I slowly made my way past the destruction I snapped a few photos from my phone and finally was able to head off towards home.

Tornadoes are incredibly random events, seemingly hand picking what to destroy and what it leaves intact, and it seems to hurt or kill with no rhyme or reason. We’ve made tremendous strides in detecting and warning people of when these storms have the potential to develop. Hopefully one day soon we can scramble the Apache helicopters to somehow fire a de-pressurization weapon to dissipate these monster storms. I’m sure somewhere someone is probably working on that concept. After witnessing Friday’s heartbreaking disaster, I hope it comes soon.

Chris Jackson
A Clarksville native, Chris Jackson graduated with a degree in Communications from Austin Peay State University. He has worked in both print and broadcast media in both Clarksville, TN; and the Middle Tennessee Area. He currently resides in Nashville, and serves as a recruiting and staffing coordinator for Key Rehabilitation Inc., a privately owned contract therapy company with home offices in Murfreesboro, TN.
RELATED ARTICLES
News