Clarksville, TN – The hilarious comedy, “Christmas Belles”, scheduled to open this weekend at the Cumberland Arts Centre, will have two new faces in the cast. Alex Syler and Susan DeJesus will now be in the roles of Rev. Justin Waverly and Patsy Price.

Personal conflicts forced the original cast members to drop out and Director, Art Conn was able to call on seasoned performers, Syler and Dejesus, to fill in with only one week’s rehearsal time.

According to Conn, “Alex Syler is a professional actor, having worked at the Renaissance Center in Dickson and I’ve worked with Susan DeJesus in several productions, so I knew they were capable of taking on these two roles. “Christmas Belles” runs December 10th, 11th, 17th and 18th.

Tickets are $30.00 plus tax which includes dinner of either Turkey or cherry Glazed Ham as the entrée choices. Call The Cumberland Arts Centre at 931-552-1106 for Reservations. The theatre is located at 710 Main Street. 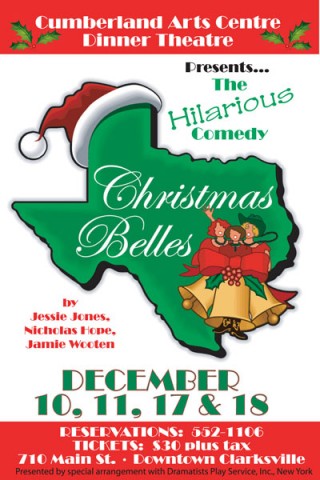