Austin Peay (4-0) applied pressure immediately in the ninth inning as outfielder Rolando Gautier led off the inning with a triple that just got past the leaping center fielder. The Govs then loaded the bases with a hit batsman and a walk, bringing Haskell Fink to the plate.

Fink battled to a 2-2 count before rifling a ball into the right-center gap,  which was caught by the center fielder but too deep to catch Gautier before he scampered home with the winning run.

As has been the case in all of its games this season, the Govs trailed early the contest and faced a 4-2 deficit entering the seventh inning. Freshman Jordan Hankins tied the game in the seventh with a two-run single up the middle that tied the game, 4-4, after seven innings and setting up the last at-bat heroics. 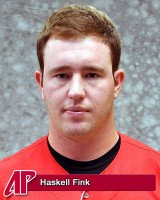 “Our offense got going and we had some guys do a great job,” said head coach Gary McClure. “We had some great two-out base hits to get us back into the game. Rolando did a great job leading off the ninth with a triple and Haskell did a great job getting him in.”

Illinois State (3-3) had plenty of opportunities in the first two innings against a struggling Zach Toney who faced 13 batters in those two frames. However, the Redbirds scored just once in both innings and stranded five batters. After the Govs tied the game 2-2 in the sixth, Illinois State first baseman Zach Amrein blasted a two-run home run, giving ISU a 4-2 lead.

“Zach just didn’t throw strikes early so we got behind,” said McClure. “What he did do was get big strikeouts that kept those two innings to single runs. If he doesn’t do that they we may get blown out early.”

Mark Allen Bounds (1-0)-the Govs third pitcher – picked up his first collegiate win after tossing two scoreless innings. Hankins finished the day 3-for-3 – he had a solo home run in the third – with three RBI.

Austin Peay closes out its weekend with a 2:30pm, Sunday contest against Milwaukee.