Austin Peay (15-17) led 16-9 after seven innings. The Govs scored in six consecutive innings from the second through the seventh to build their largest lead of the game.

However, the Govs lead would not hold as Belmont (17-17) roared back with a seven-run eighth inning as they sent 10 men to the plate. The Bruins had six hits and a walk in the inning but it was center fielder Dylan Craig who provided the game-tying RBI on a ground out to first base.

Belmont’s pitching finally solved Austin Peay’s offense in the late innings. Reliever Garrett Fanchier (2-3) worked around a one-out single to post a scoreless eighth inning and picked up the victory. He was followed by Bruins closer Jon Ivie who retired the side in order in the ninth to post his season’s sixth save.

The Bruins offense scored the game-winning run in its half of the ninth, after designated hitter Nate Woods opened the frame with a single to center field. Catcher Vinny Casha attempted a sacrifice bunt but Austin Peay closer Ryne Harper pounced on the ball and threw to second base, getting the lead runner. 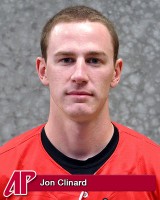 Harper then struck out the next batter he faced to get to two outs. However, he was unable to escape as second baseman Greg Brody hit a fly ball to deep left field that Govs outfielder Cody Hudson was unable to catch. Brody raced to second on the play and Casha scored the eventual game-winning run.

The Bruins late heroics spoiled an impressive offensive performance by the Govs. Austin Peay scored a season-high 16 runs in the game and their 16 hits were one shy of its season high.

Ten different players recorded at least one hit in the contest, second baseman Jon Clinard leading the Govs with a 4-for-5, four RBI outing. Catcher P.J. Torres had a 2-for-5, five RBI night that included a three-run home run in the sixth and a two-run, seventh-inning single that provided the Govs their final runs. 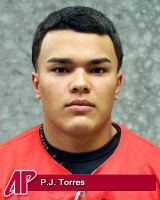 Second baseman Greg Brody led Belmont, which scored 17 runs on 17 hits, with a 5-for-6, three-RBI outing. Third baseman Zac Mitchell was 3-for-3 with five RBI.