Monrovia, Liberia – After the daily morning briefing at the Barclay Training Center here, a young U.S. Marine corporal stands in the middle of a sea of Army officers. The commanding general is beside him and is praising the Marine’s hard work. The CG hands him an Air Assault coin, shakes his hand and tells him he’ll be flying with him today.

Those who are chosen will be recognized by Maj. Gen. Gary Volesky, the Joint Forces Command – United Assistance commander, and will spend the day with him, traveling and seeing the work they’ve done.

“Any service member here who is going above and beyond their job has a chance to be the hero of the week,” said U.S. Marine Cpl. Brandon Gohn, team leader, Company F, 2nd Battalion, 2nd Marine Regiment, Camp LeJeune, North Carolina.

The USAID mission was a last minute decision for his unit, said Gohn. Although there was little time to prepare, he trained and made sure his team met all requirements needed for success.

This is his fourth deployment and he has been in Liberia since mid July, Gohn said. In that time, he has steadily worked his worth for this special recognition.

“I’ve pulled roughly 200 hours of flight security,” said Gohn. “I’ve flown with the president of Liberia, the ambassador, our CG and the General of the Armed Forces of Liberia. I’m also the Marine barracks manager. I resolve issues with rooms and find billeting for Marines on this mission.”

Gohn also played a pivotal role in supervising over 20 hours of the decontamination of mission essential equipment in preparation to transition from Liberia back to LeJeune.

The work that’s being done here has made a significant impact on the country, Gohn said.

“It’s not like everyone here is infected,” said Gohn. “But the people who are definitely need our assistance. Without our help, the disease would continue to spread and a lot more people wouldn’t make it through. The work we’re doing has saved lives, and I feel this mission is very important.” 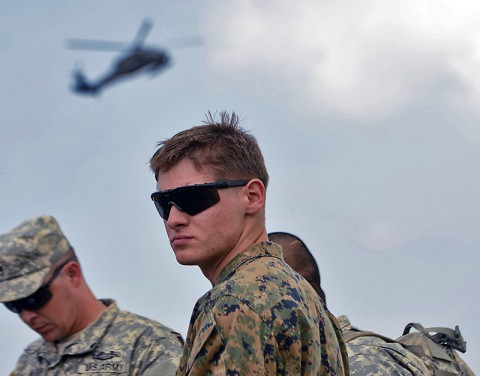 Helping people and making a difference is the driving force behind Gohn’s decision to serve in the Military.

“I just didn’t want to be some guy,” said Gohn. “The reason I joined the Marines is because I wanted to make a difference in the world. When I go on flights, I bring candy with me to give to the kids I see. They appreciate us and the work being done. It feels good knowing we’re actually helping and seeing the difference being made, not just to the country, but also the difference we’re making in their lives.”