Large waistline, cholesterol disorders and other metabolic abnormalities may increase the relative risk of cardiovascular disease more among black women than among white women.

Dallas, TX – Large waistline, cholesterol disorders and other metabolic abnormalities may increase the risk of cardiovascular disease more among black women than among white women, according to new research in Journal of the American Heart Association.

Previous studies have focused primarily on white participants and found that obesity without a clustering of at least three metabolic disorders (metabolic syndrome) was not associated with increased cardiovascular disease risk. 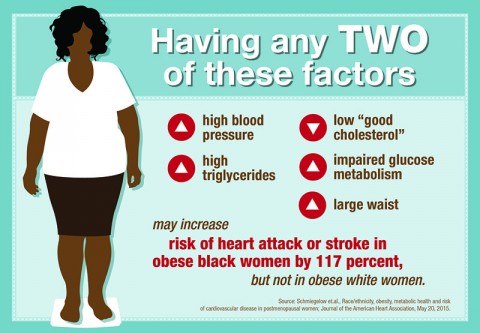 Researchers examined cardiovascular disease risk according to weight classification and metabolic health status across different racial and ethnic groups among 14,364 participants from the Women’s Health Initiative, a national study of postmenopausal women ages 50 to 79.

About 47 percent of the participants were white, 36 percent were black and 18 percent were Hispanic. Overweight is roughly 10 percent over ideal body weight. Obesity is generally 30 pounds above ideal weight.

In 13 years of follow-up, 1,101 women had a cardiovascular event for the first time (coronary heart disease or ischemic stroke).

“It appeared that the cardiovascular disease risk was elevated in black women by the presence of only two or three metabolic abnormalities to a degree that would require four or more metabolic abnormalities among white women,” said Michelle Schmiegelow, M.D., study lead author and a Ph.D. student and research fellow in the cardiology department at University Hospital Gentofte in Denmark (former visiting scholar at Stanford University School of Medicine, Stanford University).

Overweight and obese black women had elevated cardiovascular disease risk compared with normal weight black women even when they had only two metabolic problems. The number of events was low for Hispanic women so that data was not included in the analysis.

This study suggests that at least in postmenopausal women, the metabolic syndrome may underestimate cardiovascular disease risk in black women and overestimate it in white women, Schmiegelow said. Instead, an individualized approach should be used in which the type and sum of metabolic abnormalities in light of the woman’s overall risk profile should be considered.

The findings also stress the importance of the need for lifestyle intervention and preventing the development of metabolic abnormalities, particularly in black overweight and obese women, for whom the benefits may be particularly large, she noted.

Obesity increases your risk for heart disease and stroke and is also a major cause of gallstones, osteoarthritis and respiratory problems. The Association recommends that obese patients participate in a medically supervised weight loss program two or three times a month for at least six months.

The treatment plan for weight loss involves eating fewer calories than your body needs, getting aerobic exercise for 30 minutes most days of the week and learning to change unhealthy behaviors.