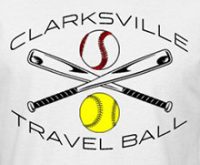 USSSA area director Brian Walker stated, “The primary focus of USSSA is the development of programs that allow for teams of all skill levels to compete against one another.  Clarksville Travel Ball’s vision is to provide an opportunity for local players to participate in tournament atmospheres.”

Results for the baseball divisions are:

For more information on future events in Clarksville see www.ClarksvilleTravelBall.com or on FaceBook.