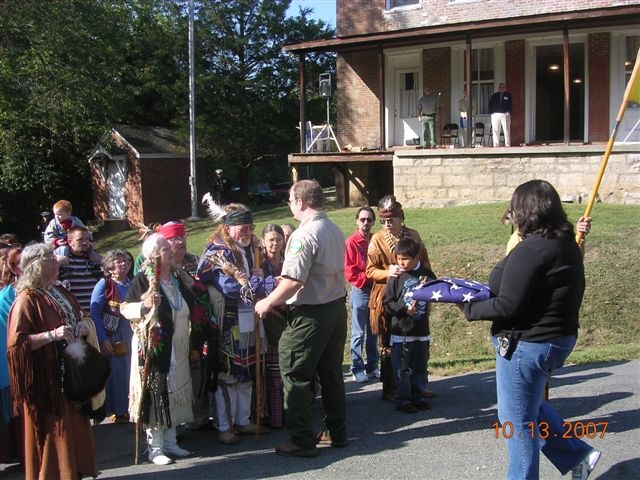 Part of the Trail of Tears has never been paved over and lies in its original condition at Port Royal State Historic Area. In a reenactment ceremony Saturday Oct. 13th, Cherokee representatives and others walked a section of the Trail of Tears and then up to Port Royal State Historic Area where they met with State Park representatives, the Friends of Port Royal, and five highly decorated military veterans.

Visitors witnessed an exchange of flags, Cherokee for American; then all payed respects to each flag through the playing of “Colors” to raise the State and National flags and the playing of “Taps” while the Cherokee flag stood erect. It was a welcoming, honoring ceremony that is way overdue the Cherokee in our nation.Speakers, including Port Royal Conservation Worker, David Britton, and Tennessee State Park Resource Manager Jack Gilpin addressed the gathering.

Barely an eye was dry in remembrance of the sufferings of the Cherokee and other Indian nations during the Trail of Tears. Already integrated into white society, they were forced from their homes into the march that took 4,000 lives between Florida and Oklahoma. 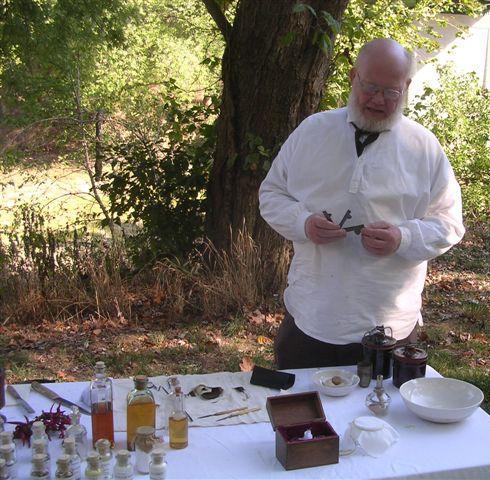 David Britton researched Trail of Tears history of the site and with the help of Dan Webber, State Parks Exhibit Engineer, put panels on display in the Port Royal museum. David Britton and Friends of Port Royal volunteer Don Bledsoe brought the Port Royal interpretive museum to display quality.The building on the Port Royal State Historic site is original from1858 and was an important piece of a once thriving town.

Volunteers Mark and Sylvia Britton were on hand to demonstrate cooking,candle making and medicine techniques typical of the 1830’s. Mark Britton displayed doctor’s tools of the early to mid 19th century and had many stories to tell of medicine used in those days.

Nearly two hundred visitors came through the park that day while the Pow Wow celebrated Indian culture nearby. This was an important event for the Tennessee State Park in presenting and preserving the history of the area. Port Royal SHA is located at 3300 Old Clarksville-Springfield Rd., Adams, TN.

The museum and displays will be open for viewing On October 20 and 27 from 8 a.m. to noon. For more information, contact David Britton, Conservation Worker at Port Royal State Historic Park at (931) 358-9696. All photos by Donald Horton. 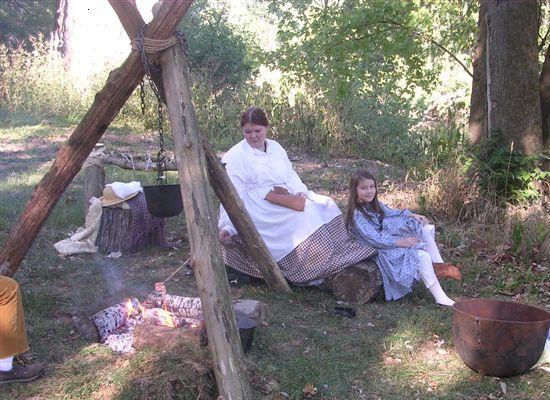 The Britton family at their campsite. 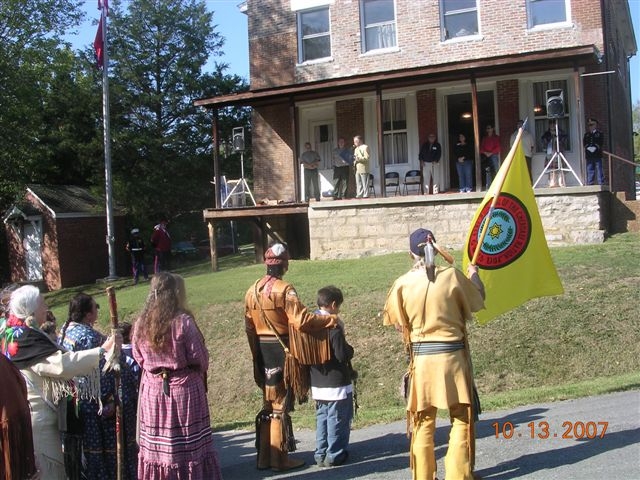