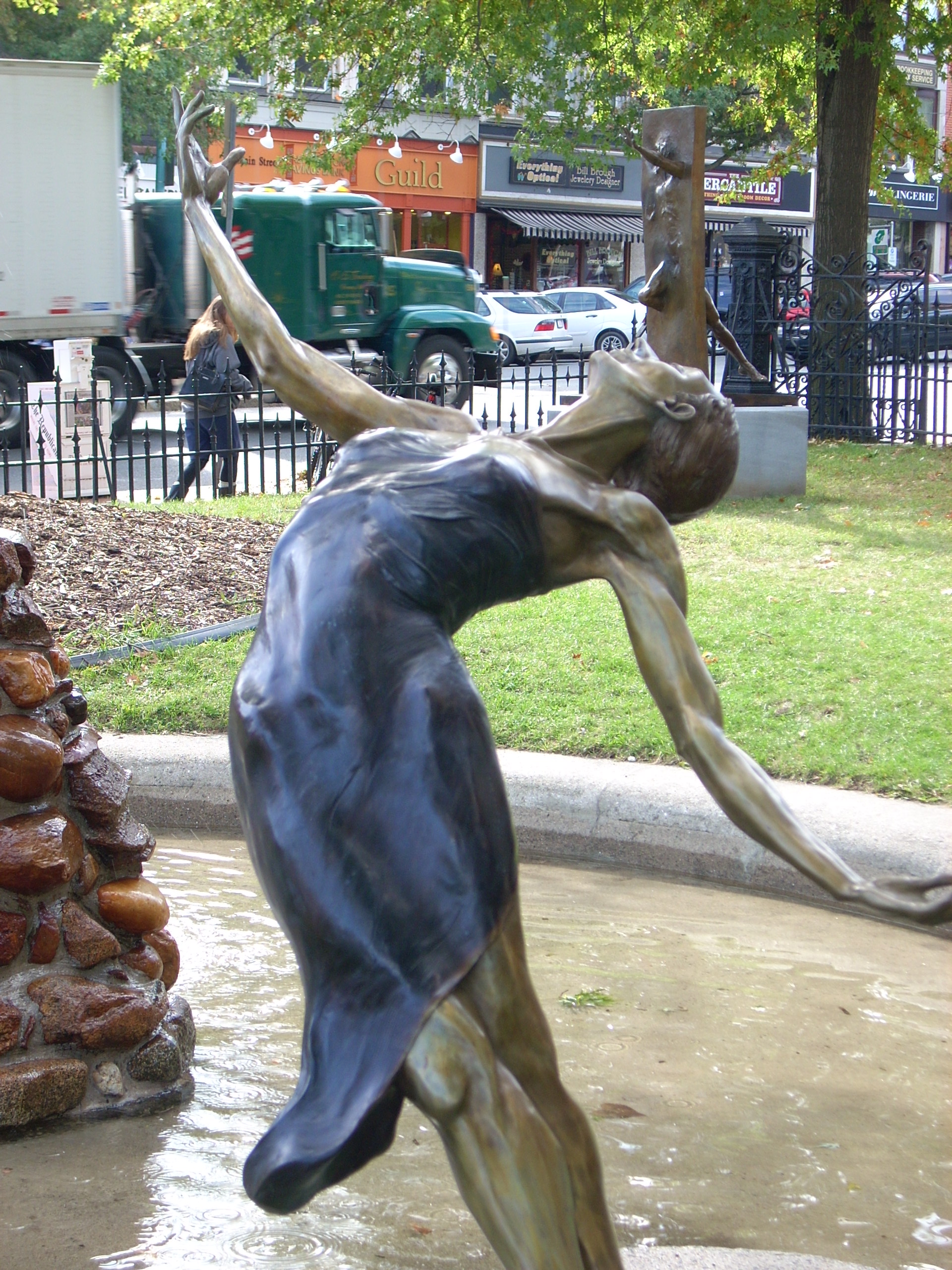 Andrew Devries holds magic in his hands, magic that unfolds with each gentle movement of his fingertips as he sculpts the figures he is famous for: dancers. Though a number of his works include renditions of the male body, Devries loves women, particularly women dancers, and the ebb and flow of their movements inspires this Western Massachusetts artist’s body of work, on display through October 2008 on the grounds of the Northampton (Massachusetts) courthouse lawns.

While On the Road in America, I took the opportunity of visiting an outdoor exhibit of art by an old friend. The exhibit encompasses a variety of Devries’ work: the expected selection of dancers,a sampling of early work (Other Side of Eden, Madonna), and newer pieces including The Bather and The Wave.

I met Andrew eighteen years ago, when he was on the brink of his now global reputation for excellence. I traveled over frost-heaved potholed road over winding roads to the fields at river’s edge where he lives and works amid some of New England’s most beautiful landscapes. At his studio in the Berkshire hills, he casts and pours the bronze figures, keeps up a steady chatter and laughs often and wildly, his laughter as much a celebration of life as his art.

His first bronze was a nine foot high dancer, the second a five foot bronze ‘Madonna.’ The images appear in his mind first; he told me once he simply “sees” them. I believe it is more than that; I believe he has to feel that movement, know it intimately, as only someone who has watched, lived with and learned such movement can. He’s paid attention. 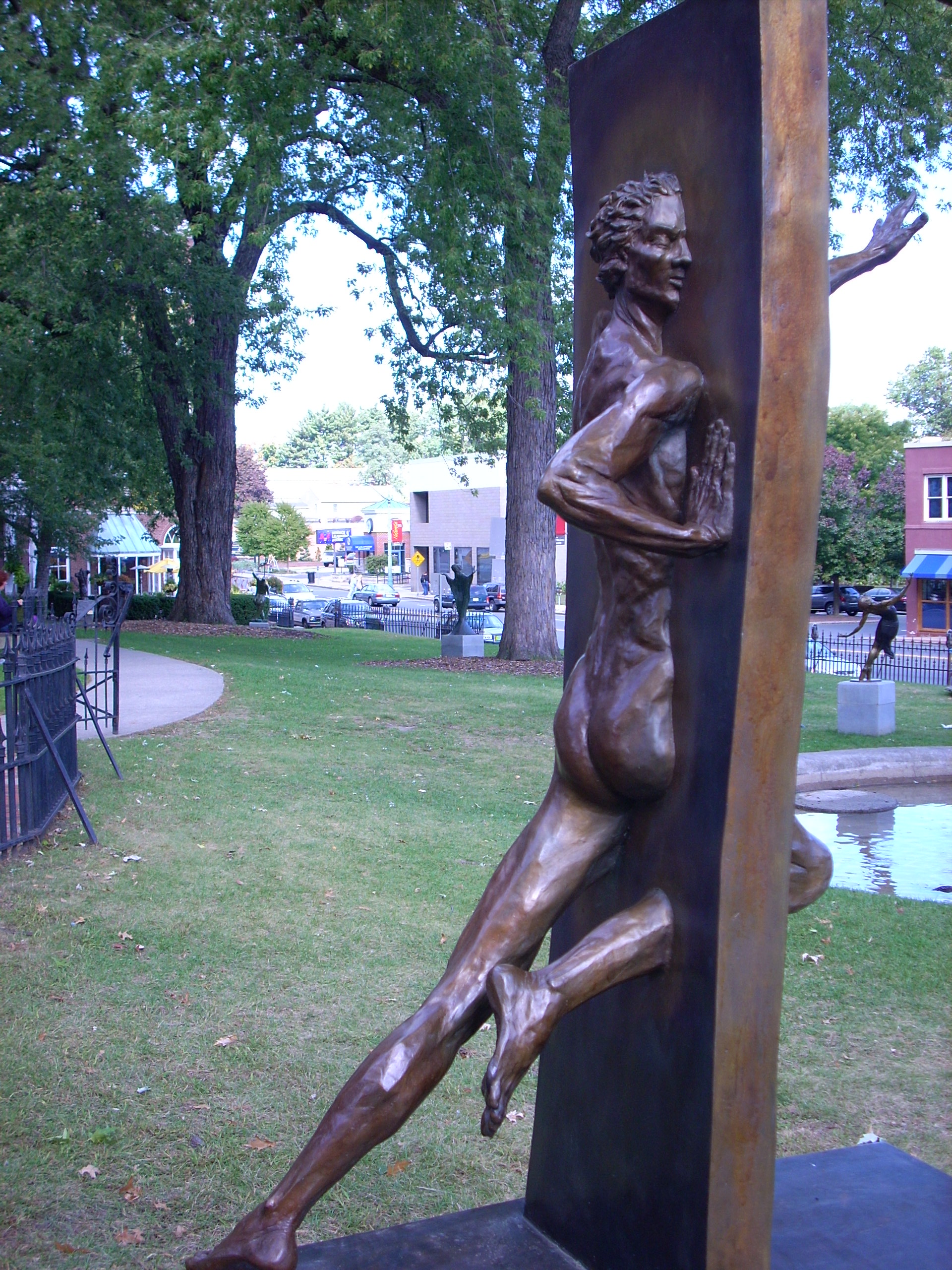 One of his earlier pieces, Other Side of Eden (left), is the form of a man breaking through a barrier, crossing a dimension, erupts on that ‘other side’ with kinetic energy; the observer cannot help but feel the force and passion of awareness. The ‘back’ of the statue is a ripple of muscle, a length of stride, the angle of a knee hovering in two realms, the force of one arm “pushing through” to that other side, where the other arm has broken through, is reaching up, out and beyond. The film buff in me sees Kubrick’s monolith of 2001: Space Odyssey and the mind of man moving to that spiritual world of stars, of enlightenment, that is the other side. I just know I would like to be the next one through.

In recent years, Devries has developed a series of bas relief; portraits of diverse people including friend, neighbor and Miniature Theater of Chester founder, actor and director Vincent Dowling. Devries’ newest additions are paintings, again focusing on the female form, alive with color, form and movement.

The Bather (below, left) is another step into a new direction, a beautiful older model in a blue swimsuit, lacking the lithe limber look of Devries’ dancers, or perhaps a ‘grande dame’ of dance, unabashedly basking in the sunlight, head thrown back, negating the practical effect of the wide brimmed hat; she is no less than magnificent. 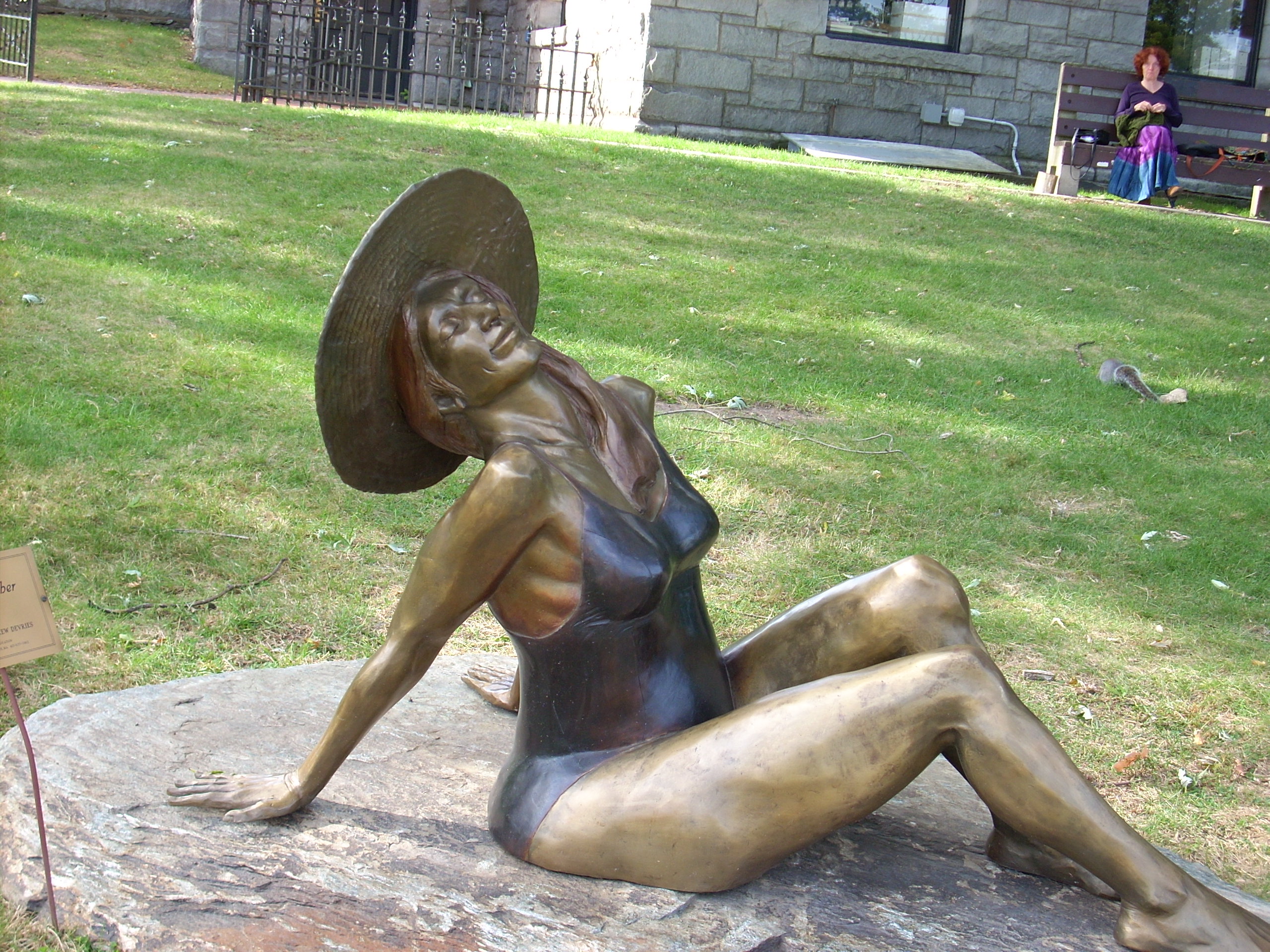 From my first viewing of Andrew’s work, I was a fan. Apart from loving dance and being passionate about art, his work touches the magnificence of the human body and the human spirit. There is an exuberance in all his work, and some are seasoned with a certain mystery, a questioning of the universe, a reverence for humanity. The bottom line, though, is that a Devries bronze takes your breath away

This exhibit, set outdoors without the barriers and barricades and restrictions of museum displays, allows you, the viewer, to walk up, peer closely, examine minutely and touch — yes, touch — the work. Up close and personal. In touching, you can feel the vitality of each piece, feel the silken flow of the molten bronze as if it were alive, a living, breathing form.

Devries, originally from Rochester, N.Y., left school at fifteen, worked the family farm, but knew in heart he would be artist. That calling was always there, rooted in his soul. At seventeen, he landed in Denver, studying dance, and dancers, absorbing the motion and fluid rippling of their movement. Entranced, he sketched, painted and on one day of epiphany, held clay in his hands. The magic began. Four years of studying and apprenticing in two studios, mastering the art of sculpting, casting and bronze pouring before touring Europe and studying there.

The process of creating a Devries piece begins with the modeling, with the creation of an armature or ‘framework’ that provides a base upon which to work wax, clay, plaster or other mediums. The modeling is the first form of the artist’s vision. Then a mold, often rubber or latex, is made from the model. In “lost wax” casting, a wax casting is created, the wax is melted off, leaving a detailed copy of the original art. The process is so refined that even a residual fingerprint can be lft on a piece of art; the artist meticulously readies the mold for casting.

Bronze pieces are often cast hollow due to issues of size and weight, therefore an inner and outer mold form is created in a layering process that can take many hours. The ceramic shells are pre-heated and the bronze is fired to upwards of 2000 degrees. The ceramic mold is filled from the bottom up, and cools completely before the shells are removed. The final finish is done with sandblasting to remove any roughened spots and the figure is then polished.

Devries and his father laid the foundation and set the timbers for the 20X24 foundry, which served as the entire studio/foundry for four years. Today there is barn studio subdivided areas that accommodate all aspects of the artworks including a setting in which these new pieces can be photographed. A map of the Devries compound can be found on his website.
He recently opened a gallery in the heart of the Berkshires, in Lenox, where his bronze work, bas reliefs, paintings and other endeavors are displayed. 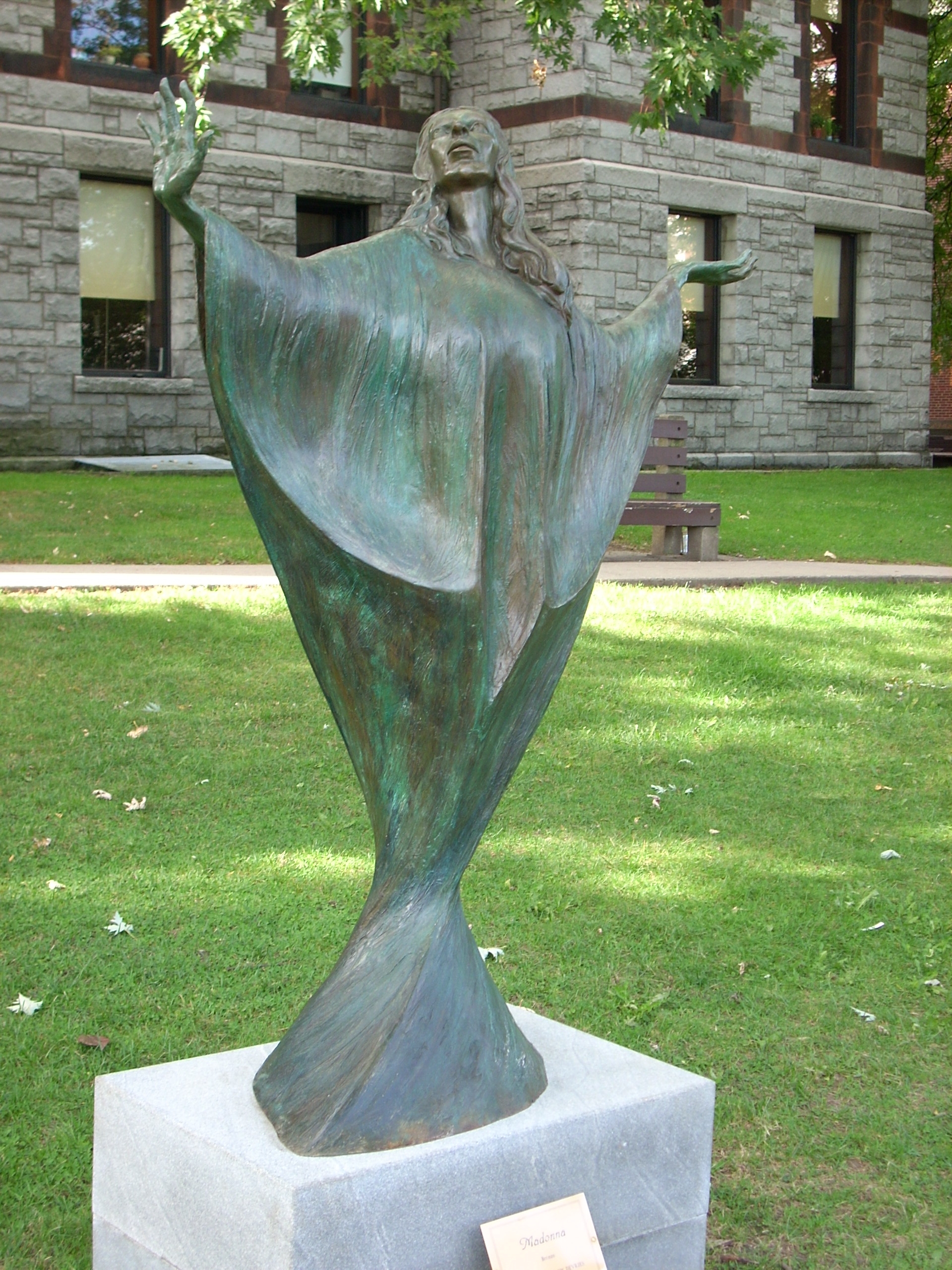 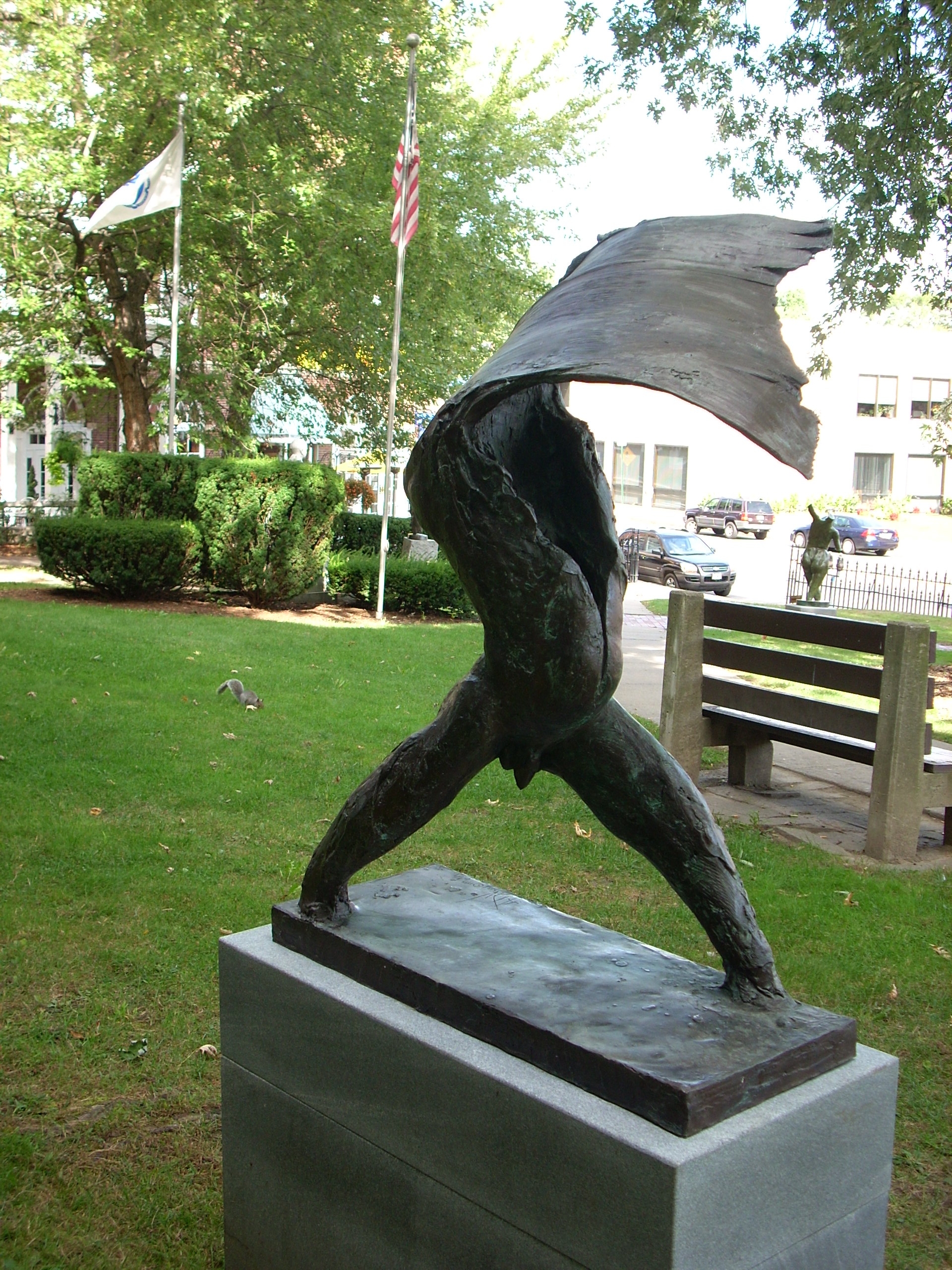