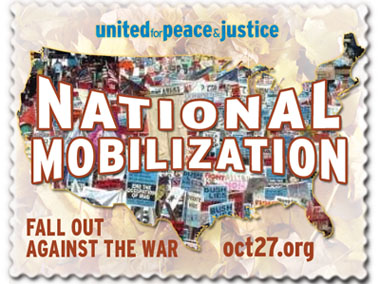 The UFPJ support helps put an additional national spotlight on what many consider the Agent Orange of this generation of wars, with depleted uranium munitions used in Iraq and the Gulf region, in the Balkans during the Clinton administration, likely in Afghanistan, and possibly in Lebanon. The munitions have been widely tested throughout the U.S. mainland, in Hawaii, and in the Puerto Rican island of Vieques as well, leaving radioactive and toxic contamination in all testing and manufacturing regions, with little cleanup effort underway except in a couple of areas identified as Superfund sites.

Linda Modica, lead Tennessee coordinator, Angela Helwig of Georgia Peace & Justice and Chris Lugo of the Nashville Peace Coalition outlined what plans have been put in place thus far, including a rally in downtown Jonesborough, a march to and musical presence at Aerojet Ordnance – remaining U.S.producer of DU weapons cores, music and speakers in Jonesborough itself, and efforts to mobilize support.

Major Doug Rokke, military whistleblower who headed up Gulf War 1 attempts to cleanup DU munitions in Iraq and later demanded their use be terminated, will be a key speaker. Also addressing the rally will be a representative from Vieques. Lugo has been in contact with Rokke and the Committee for the Rescue and Development of Vieques to help secure their presence in Jonesborough.

Angela Helwig has contacted the Iraq Veterans Against the War chapter in Atlanta for a speaker while UFPJ and Linda Modica has contacted the Gulf War Veterans Against the War and the NAACP as well. Linda is also an NAACP member. Musicians including Animal Nation, the group present at the Chattanooga Iraq war anniversary rally two years ago, have been invited to participate.

Meanwhile, Christian Peacemaker Teams will have its third stop DU delegation in Jonesborough, from Oct. 25 to Nov. 4, in its continued campaign against DU munitions, which will include team members from the U.S., Canada, Ghana and Nepal. Their presence overlaps the Oct. 27 event.

As a sidenote, Cliff Kindy, who has been key organizer for the CPT Jonesborough delegations, will be returning to Iraq in October with three other CPT members to restore the CPT presence there, suspended after four CPT members were kidnapped and Tom Fox was killed in Iraq while another team member died in a vehicle accident there.

Facebook
Twitter
Pinterest
Email
Print
Previous article‘We’re all in this together,’ OR are we?
Next articleGateway axes 28 jobs for new facility; elderly ‘gatekeeper’ among the terminated