The 1938 Mercury Theatre broadcast of H.G. Well’s classic sci-fi thriller, The War of the Worlds, will be recreated tonight and Saturday night, (Oct. 31-Nov. 1), at 8 p.m.  in “the other space” at the Roxy Regional Theatre. Admission is $10.

“Seventy years ago today (Oct 30, 1938), a 21-year-old Orson Welles, along with his Mercury Theater players, gathered at New York City’s CBS studios to perform a one-hour radio play—an adaptation of H.G. Wells’ War of the Worlds. Panic would ensue—though much of it was probably blown a wee bit out of proportion by newspapermen unhappy with radio’s increasing dominance—and mass media would never be the same. It’s easy to say that we were a younger, more naive society in 1938 and it was cake for Welles to convince six million listeners than Martians really were invading Earth, starting with Grover’s Mill, NJ.” 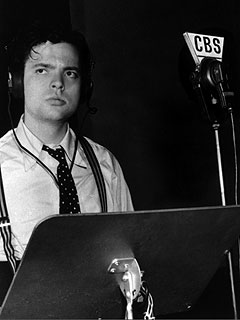 The first two thirds of the 60-minute broadcast was presented as a series of simulated news bulletins, which suggested to many listeners that an actual Martian invasion was in progress. Compounding the issue was the fact that the Mercury Theatre on the Air was a ‘sustaining show’ (i.e., it ran without commercial breaks), thus adding to the dramatic effect. Although there were sensationalist accounts in the press about a supposed panic, careful research has shown that while thousands were frightened, there is no evidence that people fled their homes or otherwise took action. The news-bulletin format was decried as cruelly deceptive by some newspapers and public figures, leading to an outcry against the perpetrators of the broadcast, but the episode launched Welles to fame.

This broadcast of The War of the Worlds was an episode of the American radio drama anthology series Mercury Theatre on the Air and was performed as a Halloween episode of the series on October 30, 1938, airing over the Columbia Broadcasting System radio network. Directed and narrated by Orson Welles, the episode was an adaptation of H. G. Wells’ novel The War of the Worlds.