APSU’s Department of Music annual Halloween music showcase was filled with a delightful world tour and musical tributes. Halloween costumes of all ilks festooned the ensemble members. Percussion instruments were definitely the focus of the evening. 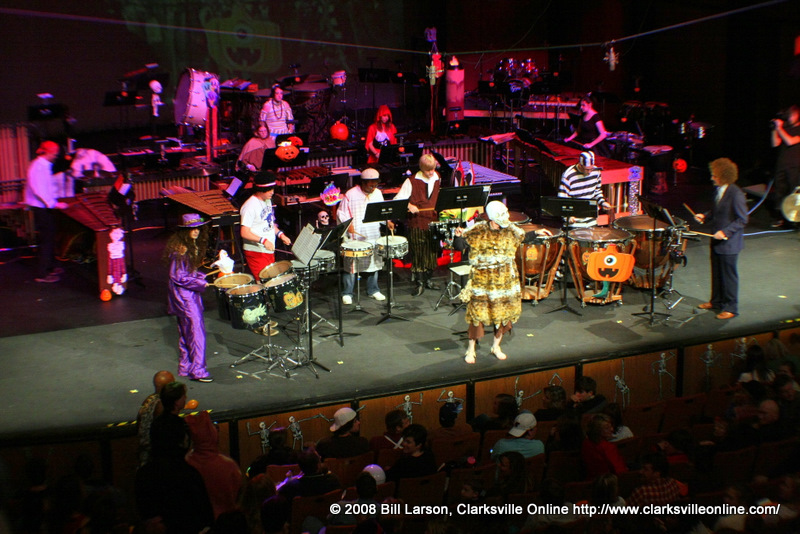 The annual APSU Percussion Ensemble Halloween Concert lived up to its reputation as a lively music entertainment value for young and not-so young. From drums and human percussion to oboes and xylophones and tambourines, to wooden blocks and ceramic bowls, sounds were produced by means both wondrous and extraordinary. 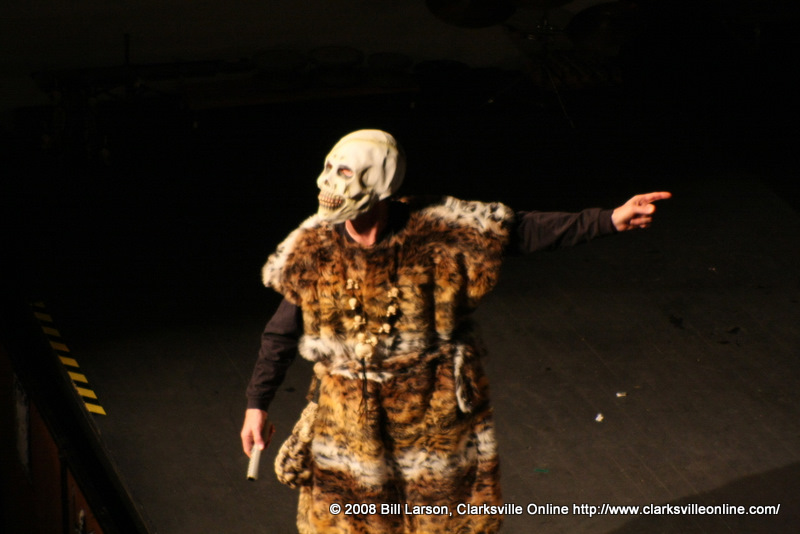 As the director took to the stage, a startled child’s cry permeated the music hall and set the perfect tone for the event. The opening piece was an African Welcome which featured the thunderous proclamations of drums calling forth. The University Choir lent their voices to this dramatic piece demonstrating the magic within this most common element of daily sound. Everyone settled in for a rousing, good show. Indeed, it was.

Next stop on the tour was the ‘Valley of Nepal’ and the melodic magic of xylophones and cymbals. This was quickly followed by a stop in Brazil for ‘Samba Macabre’ with violin accompaniment by Emily Hanna Crane. Brisk and lively tempo, the music hall filled to the rafters with overflowing rhythms of violin, xylophone and chimes.

Then came the ‘Allegro barbaro,’ a human percussion piece that showcased human feet, hands and chests as musical instruments of high impact and engrossing sentiment. And true to being back in the wilds of the jungle, ‘Me Tarzan’ featured two ape-like performers playing “Stomp”-like trash can drums to thunderous effect and applause. Audience participation in a ‘call-and-response’ segment was a special touch in this piece.

In an acknowledgment to other-worldly creatures and softer tones, Romania was the next stop for ‘Casper’s Lulllaby’ with accompaniment by the University Choir settling any rattled nerves. The 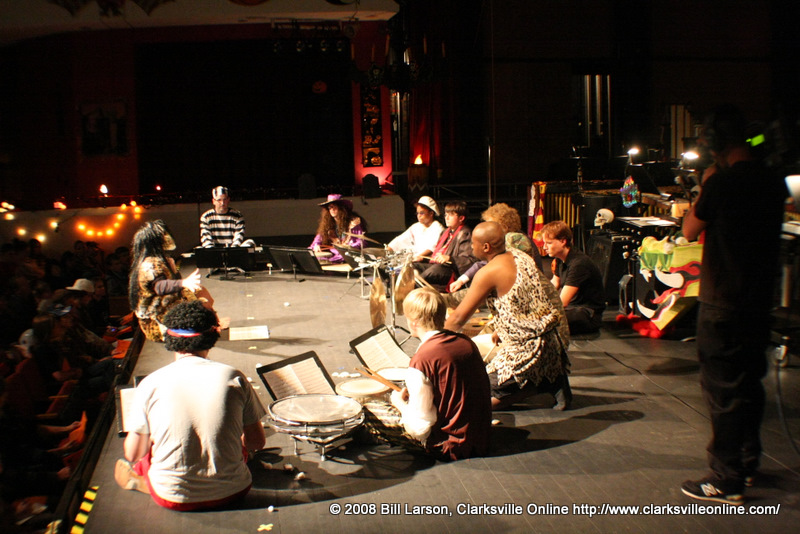 choir’s soothing and melodic voices truly invoked a tranquil demeanor to the setting. It was the perfect launching point for the hop over to China and talk of dragons of old, ‘Pulse’ evoked these fire-breathing terrors of yesteryear and their fearful onslaught. As always in those old tales, a valiant hero vanquishes the beast and saves the village. The musical equivalent was a vibrant thrashing event.

Next, it was off to Egypt and talk of mummies. ‘Walk like an Egyptian’ was the natural selection. Jeanette Zyko accompanied on oboe, as the rock piece quicken the pace and the belly dancer’s coin belt wraps tingled in the air. Then there was talk of fear of giant killer bees in Turkey. Here ‘Flight to Turkey’ served up an expanded ‘Flight of the Bumble Bee’-like excursion into flight which had heads bobbing. 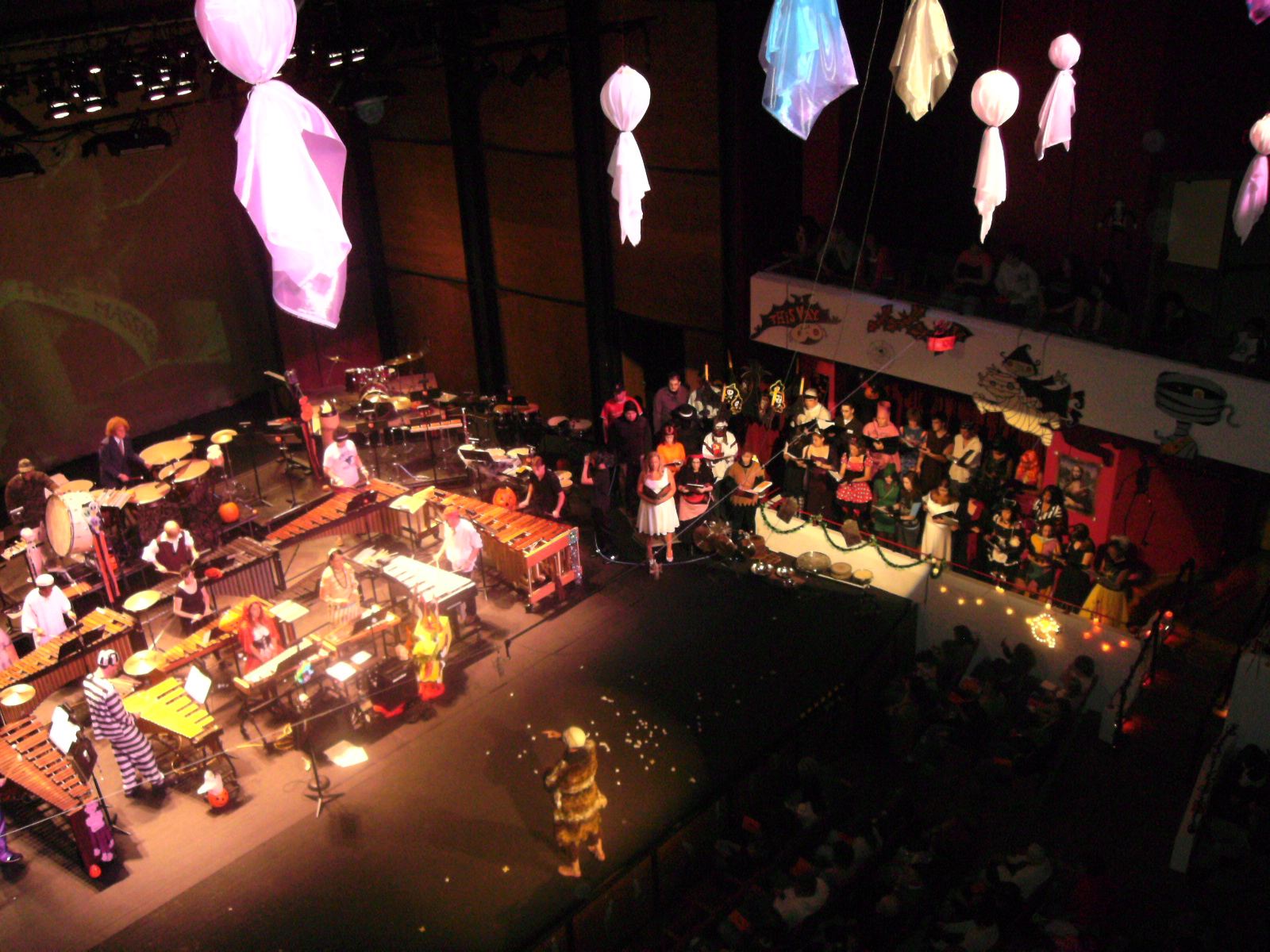 Finally, we venture to Middle Earth and ‘The Lord of the Rings,’ a land of turmoil and warfare, but the musical selection may be more familiar to some from the 1981 classic, ‘Excalibur.’ I speak of the fanfare, ‘O Fortuna’ from Carmina Burana. With the University Choir accompanying, the percussion ensemble took up the challenge and gave an absolutely stirring presentation of this majestic choral piece. Thrashing drums, cymbals dashing and xylpohones rolling across vast expanses of land, the images filled the music hall as many audience members assisted the director in conducting the ensemble. So caught up were they in the music. I must confess, I was one such participant. The standing ovation and applause at its completion was testimony to audience appreciation. Merlin himself would have been impressed.

Every Halloween, the music department makes this gift of its talent to the community. If you have not yet availed yourself of it, do make plans now for next year’s show. It is well worth what ever chill might be in the night’s air. Your spirit will be warm and soaring. Look to see you there. For now, I bid you, “Good E-e-evening!”