Voter apathy that permeated the local Primary election in August has dissipated. It’s gone with the winds of change —  winds of change that brought the early voting tally to a whopping 40% of the registered voters in Montgomery County. You read that right: 40% of the county’s registered voters have already cast a ballot for their candidate of choice.

The maze of traffic and long lines at the Montgomery County Election Commission Office on October 30, the last day of the early voting period, resulted in 3,328 people casting votes in person, with another 125 mail-in votes counted. The total votes cast on October 30: 3353. In one day. 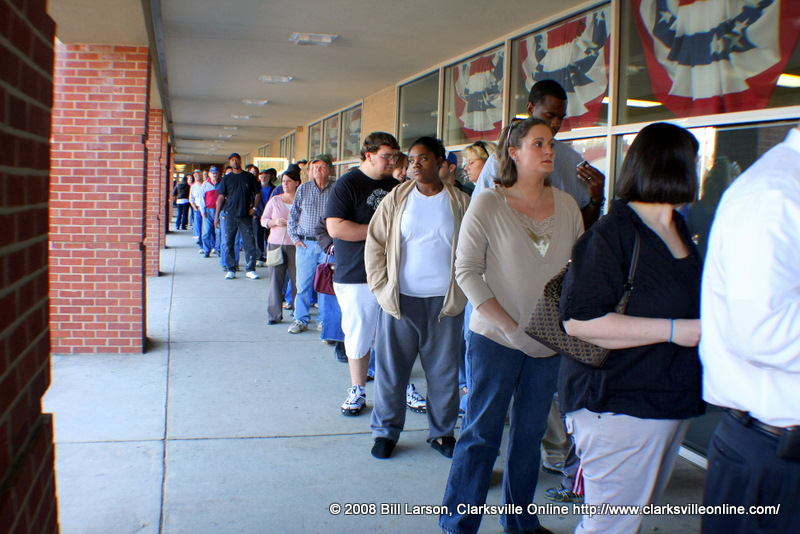 Early voting began October 15 with 1775 voters turning out at the polls and a wait of about 15 minutes to actually cast your vote, given that six people inside the Election Commission were signing in registered voters.

On Thursday, though, as the early voting came to a close, the waiting line grew, snaking around Veterans Plaza all the way to the Assessor’s Office, with some 300 people in line by late afternoon. The wait had grown to over an hour.

Be it triggered by the economy, the War in Iraq, the issues of health care, or a dozen other items of concern to American voters, the result is the same: Apathy is over. It’s about time.

In the remaining days until November 4 and its historic election, the commission will be setting up precinct polling stations and the campaigners will be ready to promote candidates and issues throughout that day. While  record turnouts are expected.

Nationally, according to CNN:

Vickie Koelman, administrator for elections for the Commission, said she and her staff had “anticipated” a heavy turnout and were not disappointed. Koelman confirmed that 90,067 people are registered to vote in the county and 40% have already done so.

She noted that no voting will take place at the Election Commission on November 4. On that day, Koelman said, the commission office will operate as a “support service” by providing assistance and documentation to voters who have changes of address or other issues related to the ability to cast their votes. “We will be here to answer questions,” Koelman said. There will be 24 polling places in operation on November 4. Polls will be open from 7 a.m. to 7 p.m.