“A Christmas Carol” is the Roxy’s shining Christmas star 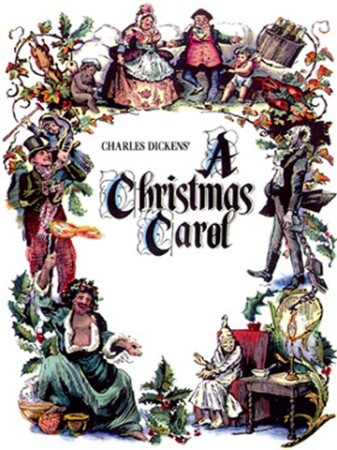 John McDonald penned this version of the much-told tale, and takes the leading role with a wicked sense of comic timing as the grumbling “bah humbug” curmudgeon. Whether it’s the growling sneer, the skeptical raised eyebrows, or the shuddering fear of his ghosts, McDonald is magical. And I am betting he had a grand time creating and sustaining this role.

“A Christmas Carol,” for the few who may not know,” is the tale of the miserly Ebenezer Scrooge, greedy, selfish, and completely unconcerned with the fate of, well, everybody. It is only when faced with the loves and losses in his past, the tragedy of the present and the dismal future as unfurled by visiting Christmas Eve  ghosts does Scrooge see the error of his ways.

Jay Doolittle is Jacob Marley, late partner of Mr. Scrooge, a ghostly apparition of ragged robe and rattling chains, arriving in time to warn Scrooge that he can still make amends for his dastardly disposition. As always, we can depend on Doolittle to make the most of any role for which he is cast.

What is especially marvelous is the interplay between McDonald and Doolittle, a sense of dramatic and comic timing of the highest order. They shine as brightly as the first star of Christmas.

Played out against the backdrop of Victorian houses festooned for the holiday, the play uses minimal props, depending instead on the animation and characterizations of its players. A good decision, for as always the casting — right down to Tiny Tim — is impeccable.

Nathan Whitmer is the impoverished Bob Crachit, scrambling across the floor of Scrooge’s office in a question for a piece of coal to burn, a scene that is ripe with comedy and phenomenal timing.

Ashton Heyl is the Ghost of Christmas Past, haunting Scrooge with images of what he had, and more imporatntly, what he threw away.

Raven Peters is the robust Ghost of Christmas Present, illuminating a path through present day events  to which Scrooge had been oblivious.

The Ghost of Christmas Future is a ghoulish painted apparition welcoming Scrooge to a bleak hereafter if he fails to change his ways.

The balance of the cast is a who’s who of the Roxy roster, with the effervescent Maria Maloney, Anne Elyse Chambers, Nathan Whitmer, and Brendan Cataldo taking on multiple brief parts in what would otherwise be an expansive cast. Fifty children were cast in the roles of the children of the story, including Tiny Tim.

John McDonald tooks the reins as artistic director, with the overall production directed by Tom Thayer.

Over the years, a wide range of productions of “A Christmas Carol” have been annual events in my family; it was an absolute pleasure to add this production to that esteemed list.  “God bless them, every one.”

The show plays through December 20 at the Roxy Regional Theatre on Franklin Street in downtown Clarksville. For times and ticket information, call the box office at 931-645-7699.