HomeArts/LeisureCelebrate Christmas than with Tchaikovsky's "The Nutcracker"
Arts/Leisure

Celebrate Christmas than with Tchaikovsky’s “The Nutcracker” 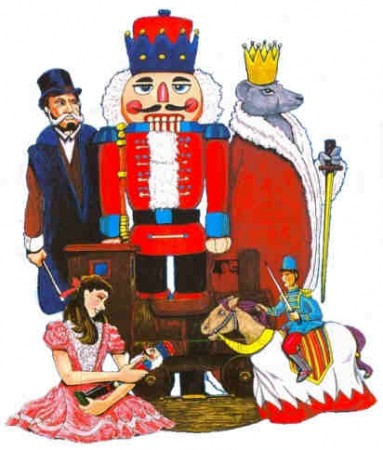 For many of us, The Nutcracker Ballet is a family holiday tradition.

The Nutcracker Ballet is based on the story “The Nutcracker and the King of Mice” written by E.T.A. Hoffman. Although what is seen on the stage today is different in detail from the original story, the basic plot remains the same: the story of a young German girl who dreams of a Nutcracker Prince and a fierce battle against a Mouse King with seven heads.

This charming ballet begins with the arrival of guests at the Stahlbaum house, home of young Clara. The guests  include the mysterious, magical Drosselmeyer, who presents young Clara with the famous “nutcracker.” later that night, Clara creeps downstairs and falls asleep with  gift wrapped in her arms.

Thus begins the fantasy dreams, with a Christmas tree that grows many times its  original height, with battling mice and a dashing prince, and a journey to wonderland embellished with memorable music and exquisite dance.

When Marius Petipa had the idea to choreograph the story into a ballet, it was actually based on a revision by Alexander Dumas, a well known French author. His version reflects more of what we have come to love as the Nutcracker Ballet.

The music of the Nutcracker Ballet was composed by Peter Ilyich Tchaikovsky. Born in the Ural mountains of Russia, he dedicated his life to music.

From 1850 to 1859, he attended the school of Jurisprudence and studied piano. In 1861, he attended classes with the Russian Music Society. In 1862, he entered the Saint Petersburg Conservatory. Beginning in 1866, Tchaikovsky taught at the Moscow Conservatory while composing many of his concertos and symphonies.

In 1892, Tchaikovsky composed the Nutcracker.

About this video: Von Heidecke’s Chicago Festival Ballet performs its wonderful production of the holiday classic, “The Nutcracker,” throughout the Midwest in addition to presenting annual performances at the College of DuPage in Glen Ellyn, Illinois; at the Rialto Theatre in Joliet, Illinois, and at Harris Theatre for Music and Dance in Chicago. Artistic director, Kenneth von Heidecke, since 1986 choreographer and ballet master for the Lyric Opera of Chicago, draws his dancers from such professional companies as Joffrey Ballet, Ballet Chicago, and the Chicago Lyric Opera Ballet and from the ranks of his own studios in Naperville, Illinois. Prima Ballerina assoluta, Maria Tallchief, director of Chicago Lyric Opera Ballet, serves the Chicago Festival Ballet as honorary artistic advisor. Mr. von Heidecke, who has performed with Ms. Tallchief’s Chicago City Ballet, the Lyric Opera Ballet, BalletMet, and Carla Fracci’s company in Verona, Italy, has choreographed for the Opera Company of the Los Angeles Music Center, the Dallas Opera, the San Diego Opera, and the Washington Opera at the Kennedy Center, among many others. In addition to working with the renowned Steppenwolf Theatre in Chicago, he has presented a full evening of his work at the Badisches Staatstheater in Karlsruhe, Germany.«