The Govs will lean heavily on sophomores Sean Bailey and Henrique Norbiato, a pair of All-Ohio Valley Conference selections last year, to anchor a young Governors team. In fact, the Govs team consists of five sophomores and three incoming freshman.

During the fall season, it was the freshmen who impressed the most. Joao Pagan and Remi Calleja each posted 5-2 records, while Jasmin Ademovic went 2-2 in a pair of fall tournaments. Norbiato continued his strong play as well, posting a 4-2 fall singles record.

Sophomore John Storie made his mark on the doubles side teaming with Pagan for a 6-0 record. Storie played at No. 6 for the Govs last season. Norbiato and Bailey also posted a 4-1 doubles record. 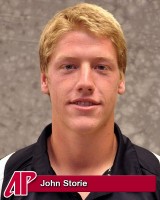 Chattanooga is led by the 2010 Southern Conference’s Freshman of the Year Roberto Vieira along with incoming freshman Trent Cobb, an Australian standout who started the season at No. 1 singles. The Mocs opened their season with a pair of losses to Lipscomb and Middle Tennessee.

Georgia State will travel to Clarksville, Sunday, after playing a Friday match at Lipscomb, in Nashville. The Panthers already have two dual match losses, falling at North Florida and Central Florida. Victor Valente picked up wins in both matches, playing at Nos. 1 and 2. The Panthers have struggled on the doubles side where they have a 1-5 team record.