Newsome is one of 127 semifinalists, with Eastern Kentucky’s Emory Attig and Eastern Illinois’ Cory Leman the only other Ohio Valley Conference representatives on the list.

Nominated by their respective schools, which are limited to one nominee each, candidates for the awards must be a senior or graduate student in their final year of eligibility, have a GPA of at least 3.2 on a 4.0 scale, have outstanding football ability as a first team player or significant contributor, and have demonstrated strong leadership and citizenship. The class is selected each year by the NFF Awards Committee, which is comprised of a nationally recognized group of media, College Football Hall of Famers and athletics administrators. 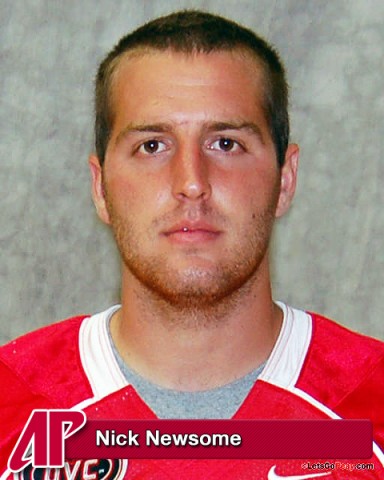 Newsome owns a 3.4 grade-point average as a political science major with a professional education minor. He is two-time Academic All-America nominee and was selected as Austin Peay Athlete Leader of the Year in 2010-11. The Dyersburg native also is President of the APSU chapter of the Fellowship of Christian Athletes and a member of Omicron Delta Kappa national leadership society.

The NFF Awards Committee will select up to 16 recipients, and the results will be announced via a national press release on Wednesday, October 26th. Each recipient will receive an $18,000 postgraduate scholarship, and they will vie as finalists for the 2011 William V. Campbell Trophy. Each member of the 2011 National Scholar-Athlete Class also will travel to New York City to be honored December 6th during the 54th NFF Annual Awards Dinner at the Waldorf-Astoria, where their accomplishments will be highlighted in front of one of the most powerful audiences in all of sports. One member of the class will also be announced live at the event as the winner of the Campbell Trophy.

Named in honor of Bill Campbell, the chairman of Intuit, former player and head coach at Columbia University and the 2004 recipient of the NFF’s Gold Medal, the award comes with a 25-pound bronze trophy and increases the amount of the recipient’s grant by $7,000 for a total post-graduate scholarship of $25,000. A total distribution of $300,000 in scholarships will be awarded at the NFF Annual Awards Dinner, pushing the program’s all-time distributions to more than $9.8 million.

Launched in 1959, the NFF scholar-athlete program became the first initiative in history to award post-graduate scholarships based on both a player’s academic and athletic accomplishments. The Campbell Trophy, first awarded in 1990, adds to the program’s mystique, having previously honored two Rhodes Scholars, a Rhodes Scholar finalist, two Heisman Trophy winners and five first-round NFL draft picks.

In August, the NFF and Fidelity announced a multi-year initiative between the two organizations to celebrate the scholar-athlete ideal and a joint commitment to higher education. As part of the initiative, Fidelity became the first presenting sponsor ever in the 53-year history of the NFF National Scholar-Athlete Awards program. To promote the achievements of the recipients, Fidelity has been working with ESPN to produce a series of short television segments about the 2011 NFF National Scholar-Athlete Class.

The segments will also include a special feature about the recipient of the William V. Campbell Trophy winner. All of the segments are airing on ESPN’s College Football Live on Thursdays from September through early December.