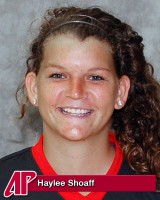 The Coral Springs, FL, native recorded back-to-back shutouts for the first time in her career, this weekend, as the Lady Govs defeated SIU Edwardsville and Eastern Illinois. The wins were even more significant because it kept Austin Peay in contention for an OVC tournament bid.

Shoaff made her biggest impact during second halves, when her defense needed her most. Against SIU Edwardsville, she made four second-half stops. Her play against Eastern Illinois helped push the game into overtime as she made three crucial saves in the final 10 minutes of regulation. In overtime, she made a pair of game-saving stops before sophomore Tatiana Ariza scored the gamewinner

On the season, Shoaff has started 13 games while making 55 saves and allowing only 12 goals. She has an .821 save percentage and a 0.90 goals-against average. She also is the first APSU player to earn Player of the Week honors since Ariza captured the Offensive Player of the Week after the season’s first week.