“I feel like Haylee and Tatiana both deserved this award this week,” said Lady Govs head coach Kelley Guth. “I’m very happy they’re being honored by the conference for their stellar performances and equally proud of our overall team performance, because it was a complete team effort.” 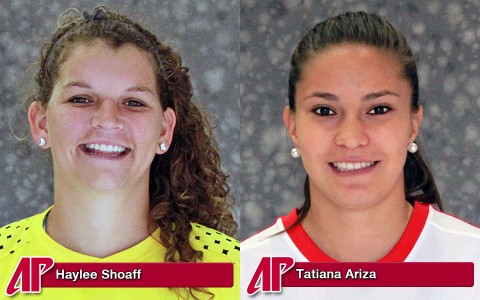 Ariza connected on the game-winning goal in both Lady Govs matches this weekend, extending her conference-leading goal tally to 11 this season. She scored twice against Tennessee Tech, Friday (50′, 55′) for her fourth multi-goal game this season.

Sunday, her 15th-minute goal proved to be the game-winner that clinched an Austin Peay berth in the OVC Tournament.

In conference play this season, Ariza now has eight goals and three assists. Her conference-leading 29 points is the second-highest single-season mark in Austin Peay history.

This is Ariza’s third career weekly OVC honor. She’s won one each year since joining the Lady Govs, the last of which came the opening week of the 2011 season for her five-goal week against Alabama A&M (hat trick) and Chattanooga (two goals).

Shoaff recorded her fifth shutout in the last six matches, making 11 total saves in two victories on the weekend and leading Austin Peay to an OVC Tournament berth. She made seven saves against Tennessee Tech, Friday, and four against offensive juggernaut Jacksonville State, Sunday, becoming just the second keeper to shut-out Jacksonville State this season.

All five of Shoaff’s shutouts this season have come in OVC play. Her 87 saves are third-most in the conference and her 1.03 GAA this season would be third-best in APSU history if she maintained the current pace.

Shoaff was also named OVC Player of the Week by CollegeSportsMadness.com.

This is Shoaff’s second career weekly OVC award; she won for the week of October 25th, 2011 thanks to back-to-back shutouts against SIU Edwardsville and Eastern Illinois.

“We’ve got to keep building momentum this weekend,” Guth said. “it seems like we’ve gotten better each week.”

The Lady Govs close out the regular season with a 6:00pm, Friday, road match at Morehead State and the regular-season finale, 2:00pm, Sunday, against Eastern Kentucky at Morgan Brothers Field.