Delgado (5-1), who battled a high fever before and during the outing, began the game by striking out four of the first five batters he faced and struck out the side in order in the second. He would surrender a run in the third, but settled back in and retired eight consecutive batters and 14 of 15 until surrendering a second run in the seventh.

Delgado struck out a career-high 10 batters one week after setting his career high with nine strikeouts against Jacksonville State. He surrendered only four hits, did not walk a batter and allowed two runs (one earned) over seven innings for his season’s fifth victory. 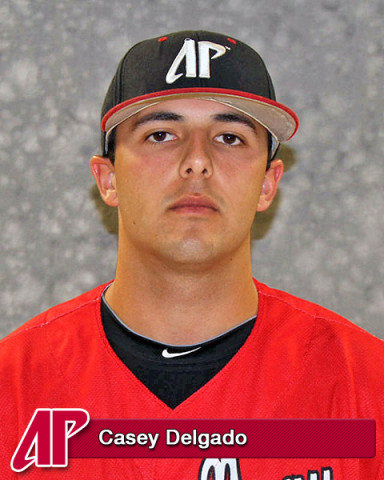 Austin Peay (21-5, 6-1 OVC) provided Delgado all the offense he needed in the second inning when catcher P.J. Torres hit a two-out, three-run home run. The Govs would tack on another seven runs in the fifth inning, senior shortstop Reed Harper punctuating the burst with a three-run home run.

Murray State (12-14, 6-5 OVC) managed only two hits off Delgado through six innings before posting two hits, including shortstop Noah Zipko’s RBI single, in the seventh inning. The Thoroughbreds would not record a hit against the Govs bullpen in the eighth and ninth innings, finishing the day with four hits while striking out 12 times.

Zipko led Murray State with a 2-for-2 outing. The top five batters in the ‘Breds lineup were held hitless over 15 collective at-bats.

Austin Peay, which clinched the series with the win, and Murray State conclude their three-game series with a rescheduled noon, Saturday contest.