Wallace finished the three-round, two-day tournament at 8-under 208. Lee’s Hunter Vest captured the event with a 12-under 204.

“Tucker played well,” said former Govs standout Dustin Korte, who now serves as assistant coach. “He had a really good tournament. I am really proud of him.”

Govs’ freshman Eric Hedberg proved solid, sandwiching a second-round 76 with a pair of 2-under 70s, allowing him to finish at even-par 216. He tied for 17th.

“Erik has said he still is not hitting the ball like he did before he came over here,” Korte said. “But you have to play with it the best you can, hit it as good and you can where it can get you around the course. Erik is doing that right now.” 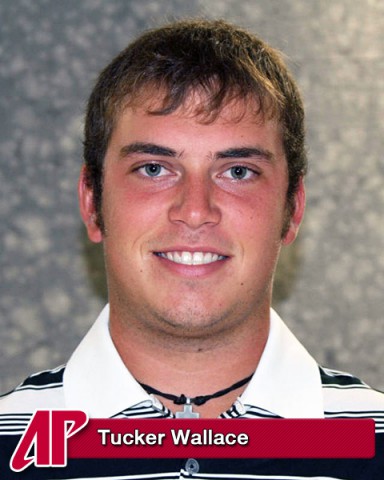 Senior Alasdair MacLennan was consistent finished at 221 (71-75-75) while redshirt sophomore Cleve Guinn overcame a first-round 82 to shoot three under (71-70) on the final two rounds to end at 223.

Korte was pleased with his first foray as a stand-alone coach and is excited about next week’s F&M Bank APSU Intercollegiate that begins Monday at the Links at Novadell in Hopkinsville, KY.

“It’s not like I was suggesting or sending in plays like you might in basketball,” Korte said. “My main job was to keep them positive. I think I did an OK job. It was a great experience for me.