Clarksville, TN – Each year, Austin Peay State University selects a novel for incoming freshman. This year the selection was “Where am I Wearing: A Global Tour to the Countries, Factories, and People That Make Our Clothes” by Kelsey Timmerman.

The novel develops an understanding of the people and places that create the fashion we wear; as well as the global impact of the garment industry.

As part of the reading, students participate in a Creative Response for the Freshman Legacy Project in which they develop a personal connection to the novel based on theme.

For the second year in a row, students from The Middle College at APSU captured the judge’s attention. All submissions are entered into the contest “blind” and out of 1,500 entries, Middle College students shined.

Riley Miller’s comparative essay developing the plight of the immigrants from Upton Sinclair’s The Jungle to the factory workers in the garment industry of Timmerman’s novel received an Honorable Mention award. His work will be on display in the Woodward Library at Austin Peay State University.

Kalven Hammer submitted an essay that focused on the Trickle Down Theory of Economics and the judges saw a winner. He was selected as one of the top wining entries for the Freshman Legacy Project for the 2015-2016 school year. His essay sought to develop “the critique shown perfectly in Where Am I Wearing?,as Kelsey Timmerman traveled the globe meeting the factory workers who made his clothing. 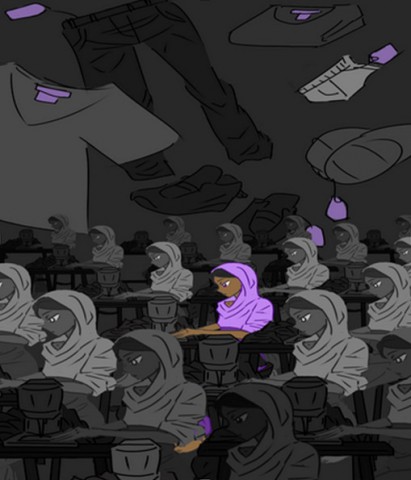 The theory of trickle down economics is disproved as effective…in his journey across the world” (Hammer). Hammer indicated his inspiration for creating the essay came from learning “some of the most influential and prosperous clothing industries in the United States, including Nike, have outsourced factories to foreign markets in order to save money.” His essay eloquently states that “[t]he trickle down economic theory fails in practice, and this shows in the increase in poverty and death tolls in those outsourced markets across the world.”

Alvin Gao submitted a graphic art design that emphasized the “importance of individuality in the garment factory scene. Each person of the thousands who work at garment factories have their own story to tell, but the system of which they work in oppresses the distinct features of each person. As such, it is hard for consumers to view these people for who they are: people” (Gao).

He was also selected as one of the top wining entries for the Freshman Legacy Project for the 2015-2016 school year. He was inspired to create his project by an individual met during Timmerman’s travels, Arifa.

Timmerman expressed, “To me, it’s controlled chaos; to them, it’s six o’clock…Here, I know a little about Arifa’s [life] and enough to know that many of the hundreds of workers passing by have harder lives than I could ever imagine” (62). In his graphic design, Gao developed this sense of individuality.

As winners, Kalven Hammer and Alvin Gao, along with their instructor, Cresta McGowan, are invited to attend the private dinner celebration that features Kelsey Timmerman, the author who brought this story to life. This event precedes the keynote address by Timmerman in which all winners are honored.

When notified as winners, both young men reveled in the accomplishment. Their English IV instructor, Cresta McGowan, beamed with pride, “Upon learning we had two students selected to attend the winners circle this year, I was elated. I almost could not contain the joy I felt for these young men. It is truly an honor to teach them.”

Next year, Mrs. McGowan plans to continue The Middle College’s participation in The Peay Read, “Our students are a part of the population at Austin Peay. They actively contribute to campus events, and this is another opportunity for us to build their college transition.”