Austin, TX – Two Austin Peay State University women’s tennis players are among the 45 student-athletes across all of Division I to be named to the 2018 Google Cloud Academic All-America® Division I At-Large Teams, announced Thursday. 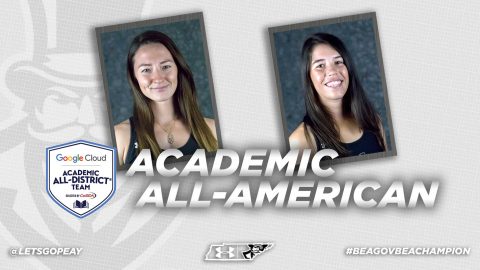 Covington finished her collegiate career with an unblemished 4.00 grade-point average, double-majoring in biology and English. In addition to a career-high 10 wins to cap her playing career, Covington filled a trophy case with her academic accomplishments—she took home Austin Peay’s Female Scholar Athlete and Perkins Freeman Academic Achievement honors for 2017-18, she was an ITA Scholar-Athlete for the 2016-17 season and is a shoo-in for both the Ohio Valley Conference Commissioner’s Honor Roll and the OVC Academic Medal of Honor, both of which will be her career’s fourth appearance among the league’s elite student-athletes.

The only three-time OVC Player of the Year honoree, Yanes Garcia also carries a 4.0 grade-point average through three seasons, majoring in computer science. In addition to the same OVC and ITA honors Covington has enjoyed, Yanes Garcia’s career has been rife with the sort of athletic performances that make her one of the most decorated players in league history. She went 16-2 at No. 1 singles as a junior, reeling off a 16-match winning streak at one point, and is 43-7 over the course of her career.

Both players earned second-team Academic All-American honors, representing the OVC alongside Eastern Illinois tennis player Grace Summers. The Google Cloud Academic All-America® program recognizes the nation’s top student-athletes for their combined performances on the field and in the classroom.