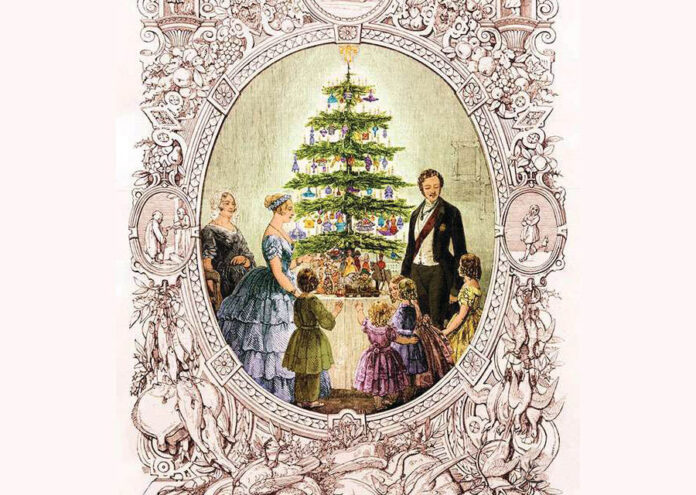 Many Americans are not aware that some of the enduring Christmas traditions they enjoy every year are rooted in those started by the British Royal Family back in the 1840s.

Here’s a look at a few of the more colorful:

It all started with Queen Victoria and her German-born husband Prince Albert, who were instrumental in bringing German Christmas traditions to Britain, such as the Christmas tree. Until then, most people in Britain thought the idea of having a tree inside the house was a little strange.

A branch of a tree, or holly, or mistletoe was common, but the Christmas tree as decoration wasn’t truly accepted until an engraving published in 1848 in the Illustrated London News depicting the Royal Family celebrating Christmas at Windsor that the tradition was adopted widely.

Soon every home in Britain had a tree decorated with candles, sweets, fruit, homemade decorations, and small gifts.

The notion of sending Christmas cards also originated during this period. Thanks to the industrialization happening at the time and the widespread use of the printing press, items such as cards and books became less expensive to make.

When postage costs lowered in 1840, this led to the real boom in buying and mailing Christmas cards.

While the Victorian Royal Family may have been the impetus behind the public’s adopting Christmas trees and cards, when it came to the Christmas feast, there was a lot of variety on the Royal menu. Roast beef, turkey, mince pies, soups and plum pudding for dessert.

But the majority of people in Victorian England weren’t wealthy, so in order to have a festive bird on the family dinner table, some would join a goose club so they could pay in installments throughout the year.


And all the other traditions of Christmas trees, Christmas cards, the Christmas feast and gift-giving were celebrated in England as well as across the pond in America.

You can get the Royal fan and history buff in your life (including yourself) the gift of hundreds of documentaries about the Royal Family and royalty around the world this holiday season through the True Royalty TV special offer. For $39.99, you can give a full year subscription of True Royalty TV.

Go to www.trueroyalty.tv for details and options.