What a difference a year makes!

Just a year ago, on a hot muggy summer morning just like this, I was awakened by the yapping, howling, clawing of a manic, panic stricken dog who is credited with saving my life. He persistently prodded me to wakefulness as fire ripped through the central part of our house. I was able to get him out, and wake my son-in-law, who was sound asleep in another part of the house after a very late second shift night. We got out.

We grabbed a garden hose and were pouring water through the front door as firefighters arrived with bigger and better equipment. We watched as the windows that weren’t blown out were pulled out with long handled poles. It didn’t last long at all, but our losses were great and our extended family split apart. 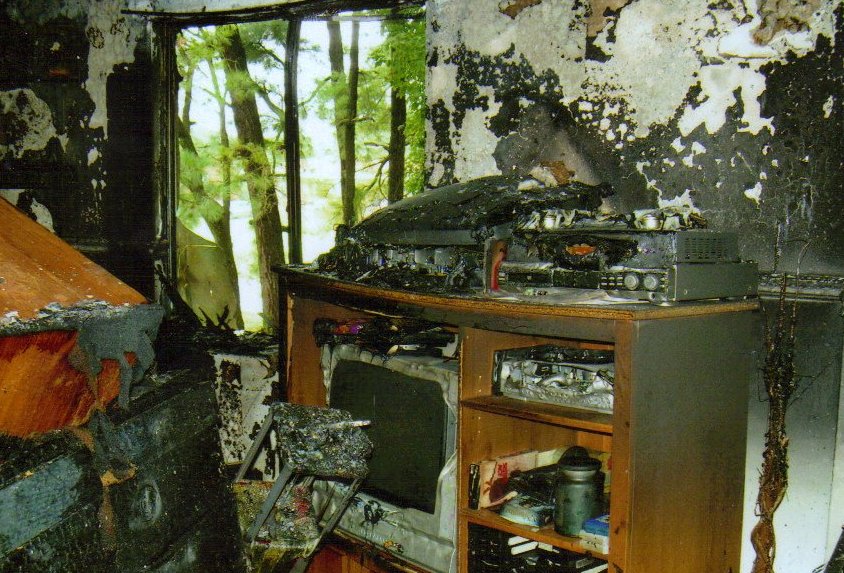 As we stood beside the Red Cross disaster van, me barefoot in my pajamas with damaged glasses , singed hair and unsuspected burns, my son-in-law shirtless in jeans and barefoot, figuring out where we would all sleep that night, get food, clothing. The Red Cross disaster team helped pull it all together then, and the unexpected generosity of friends and neighbors and strangers did the rest. We are all okay now. And we haven’t forgotten, we still appreciate, and we will always remember.

So for all of you, and you know who you are, who showered us with kindness, assistance in many forms, shapes and sizes, I would tell you that we are doing fine. And I would thank you all one more time. From the bottom of my heart.

The past year has been one of redirection and recovery. And of mourning and loss. I still have nightmares and am little paranoid about fire. My granddaughters insist on fire detectors in EVERY room now. We salvaged some things, lost too many, but this shape-shifting of our lives has given us the gift of new appreciation for what we do have: each other. Alive. With a future spread out before us. Waiting.

In this spirit of hope, I wanted to tell those of you who know us, and the strangers who don’t know us but offered help, support and kindness anyway, that we are okay. We are survivors. And this is where we all are now …

I finished a graduate semester despite the literal meltdown of my computer and the rendering of my research to ash. I am on my way to my MFA in Writing. Persistent. Determined. I write for this website from home, and monitor the FreeThinkers for Peace website on my space. And I am a Red Cross volunteer now and sustain my activist activities, political interests and peace-mongering.

My daughter, Kelly, is settled into a little house, recovering from recent surgery and managing chronic health conditions. She is planning to start college in January part time, a decision delayed for a semester because of her illness. But she is recovering well and will be fine.

My son-in-law managed to find a small home in the same school district for the two teens who are still in high school. Small house, but neat, affordable and quiet. He continues to work in Hopkinsville.

My granddaughter Brandi sailed forth bravely, going back to school the day after the blaze in borrowed clothes. It was a year of senior pictures, high school graduation (16th in her class), and the start of college (just last week at APSU), where she will put her mastery of math and science to work as a biology major. She’s discovered theater and art, and is addicted to both now, more than willing to be my sidekick as I review Roxy shows this year for this site.

My granddaughter Rochelle got an after school job, bought a used car, dyed her hair a lovely shade of purple (lavender, really), and it seems as if her hair has always been that way. It suits her, and she took a stand with her school about that hair color, opting to exercise her “free speech and freedom of expression.” She is a senior now, looking forward to pictures, prom and graduation, and enrollment at APSU next year — as an earth science major. Sh’s a terrific writer too.

My grandson, Bobby, is a freshman, and thrilled to be in a “construction” class where he will get to work with power tools in addition to his more traditional classes.

We lost one pet, an Iguana named Rosa, in the fire. But Rochelle’s turtle, Cuzco, is still paddling in an oversized tank, rearranging and rattling his collection of rocks in the middle of the night. Bobby’s bearded dragon remains lazy and listless until a tasty bug passes by (then he moves like lightning, predator and prey). Brandi’s puppy, Jack, found another home, since the teens now live in a “no dogs or cats” home now. They have a new Iguana on a growth spurt.

As for the hero dog, KeyKey, well, he is with kelly. He still operates under the assumption that he is human, and is as loveable as ever, still shaking like crazy in storms, barking out his joy at seeing his people coming and going, and gnawing on the regular offerings of juicy bones and occasional treats. He ‘s just a little bit spoiled, but he’s earned it. Tonight he’s getting his own steak, T-bone and all. And his favorite doggie treats. And a lot of extra loving, which will be tough, because we max out love every time any of us see him.

So once again, I would say to those whose kindness helped all of through those rough times, thank you.