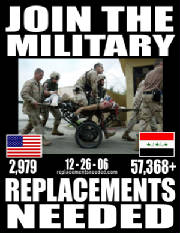 Despite the planned “surge” of additional U.S. troops in Iraq, the body count of American soldiers killed there seems to have slowed bit since the beginning of summer, but Battlefield Iraq remains bloodied — in many cases, by the lifeblood of bystanders caught in the crossfire of a war supposedly “won” over three years ago.

As of Tuesday evening, August 28, Iraq had claimed the lives of 3,732 American soldiers. The most recent is Pasadena, California, Marine, Lance Corporal Rogelio A. Ramirez, whose home base was Camp Pendleton; he became the latest US casualty, according to the statistical website icasualties.org. Ramirez died in Al Anbar province in “combat operations.” He was #3732.

While the stream of flag draped coffins has slowed from the heavy casualty reports of early summer, the Iraq landscape remains soaked in blood. Four people, Shi’ite pilgrims to a religious site in Kerbala, were killed, and 18 others wounded today. In another Iraq city, 35 people were killed and 180 injured at a Shia religious festival. Now an estimated 1,000,000 pilgrims have been ordered to abandon a major spiritual celebration in Kerbala, told to simply leave the city and put their faith on hold as some of their numbers are being slaughtered and the rest are potential targets in a mix of civil and holy wars. And that’s just today. The American body count will continue to climb with each day, each week of deployment. And American blood and Iraqi blood all look the same in the sand.

On the home front, President Bush is preparing a September update on the state of the Iraq War and the surge of American troops that is supposed to turn the tide. But is the public going to buy it? Not likely, not when the $200 million a day price tag on this war has no expiration date. 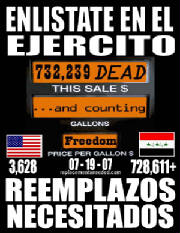 Meanwhile, on our home front, military recruiters are upping the ante, offering large bonuses — up to $20,000 — for quickie enlistments with a guaranteed Sept. 30 departure date for boot camp, and $2000 finders fees (per new recruit) to national guardsmen who convince others to sign on for military service.

According to the Washington Post, 90% of this summer recruits were enlistees who took the money to sign on the dotted line. The target number of new recruits is 80,000 and it has been a hard number to reach; bonuses have brought recruiters and their elusive bottom line a little closer. Here’s how they are doing it:

At a time when President Bush and his administration push for an academic excellence package in the form of a mandated but unfunded “No Child Left Behind ” for our school children, that same expectation of higher standards apparently doesn’t apply to our military. This administration seems now much more willing to equip all those students left behind with war toys and send them out to play on Battlefield Iraq.

The dumbing down of the military comes in the form of lowering recruitment standards lightening up on the academic standards for eligibility (high school diploma not required), and taking a ‘don’t ask don’t tell’ policy toward people with mental health and physical issues that might previously have kept them out of military service.

This downgrading of standards and expectations is an issue that has many experts wondering just what kickback the lower standards will have. It’s not just whispered about; pick up any newspaper — the Post, the Chicago Tribune, the New York Times, The Boston Globe — and read all about it. Tune in to just about any news station and you’ll find a debate about it. As for the web — type in this topic and start sorting through through thousands of websites addressing the issue and its potential impact. You can pre-date the 9-11 disaster and go back to 1999, and find people who were already anticipating issues with the volunteer Army’s pool of recruits long before Iraq, long before it became the newest hot button issue of 2007.

The brass are pulling out their hair on this one. They know that regardless of how high tech their weapons are, without skilled and motivated warriors the best weapons in the world are worthless.

Many solutions are being kicked around. Unfortunately, most have to do with “dumbing down” the Army by further lowering standards instead of smart moves like immediately fixing the pay, cleaning up the lousy living conditions …

(During Vietnam), Project 100,000 was implemented to produce more grunts for the killing field of Vietnam. It took unfit recruits — classified as Category IV’s — from the bottom of the barrel and rushed them to Vietnam. The result was human applesauce. Cat IV’s sustain the highest casualties of any group and caused such massive discipline problems — fragging, drug use, racial strife — that by 1973 the Army had been virtually brought to its knees.

Who are most likely to enlist with these cash incentives beckoning? People caught in the economic bind of poverty, people having a hard time find a job at a living wage, high school dropouts, people who can’t afford to go to college, people who hope they’ll survive war and be able to return home and attend college, people who want the bonuses to buy homes or help ease the cost of living many young families face. And yes, some people who genuinely want to serve their country and bring needed skills to the table. $20,000 may seem like a great incentive; it’s more than a year’s salary in the form of a bonus. But it can carry a much greater price than a signature on the dotted line.

In Slate, Fred Kaplan asks recruits to consider these questions and consider the consequence:

If you are thinking about going to war, think again. Do you really have to? What might happen if you don’t? If you think the war will be easy, what will you do if it’s not? How much death and destruction are you willing to inflict — and absorb — in its cause?

The Vietnam war ravaged the American military for a generation. it looks like the Iraq war might be about to do the same. 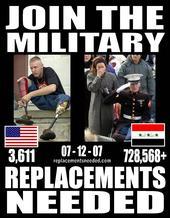 But even as the hunt is on for recruits by any and all possible means, an increasing number of parents, relatives, teachers and counselors are reluctant to recommend the military as a career to young people on the cusp of life-changing career moves. College or military? Education or Iraq? For there is little doubt that most of these recruits will be shipping out as fast as they are mustered out of basic training.

It’s not just dumbing down the military to meet enlistment quotas (which puts our competent and qualified troops at additional risk); it is a case of needing too many replacements for a seemingly unresolvable, unwinnable conflict that has depleted and exhausted the best of our finite military, a war that public opinion is increasingly loathe to support emotionally, politically or financially.

We need a strong, sound military, and that isn’t going to come on the backs of poorly educated volunteers or volunteers with histories of mental health problems like depression, ADHD, mood disorders, bipolar disorder and other diagnoses. It’s a high tech world in need of high tech military. Education. Skills. Best of the best.

We need a strong, sound military, and we won’t get that from troops who are burned out after second and third deployments, extended deployments, diminished time stateside, and a host of war-related physical injuries and post-war emotional problems.

We do not need to deplete the skilled pool of soldiers we do have by wearing them down in a carbon copy of the Vietnam quagmire. They deserve better. We all do.