On September 11, six years later: Mourn, honor, and move on …

“Mourn as you must, but honor me most by continuing to live and be the best that you can be.”

In December, 2001, I reluctantly went to Ground Zero, to the pile of debris, the hole in the ground, the shattered remnants of buildings that had been the World Trade Center complex in downtown Manhattan. As so many others had already done, I inhaled the dusty air, some of which may have been human once.

I stood on the gallery of a church, leaning against one of its columns, staring aghast at the immensity of the devastation. Rubble. Piles of rubble. Behind makeshift fences and barriers. Designed to keep out a steady stream of the curious and the mournful.

I looked skyward, from ground level up to the top of a faceless building, exterior walls gone, the world privy to the angle of every desk and chair and file cabinet in the now wall-less, fully ventilated window offices. Huge loosely hung sheets of black tarp fell a hundred stories from roofline to sidewalk, and running high across the that roofline, touching the clear blue sky above, was a multi-story American flag.

I remembered so many times before,walking across the plaza, riding the elevator to Windows on the World, dining with my mother as the panorama of the Big Apple glittered around us. Seemed like yesterday. I was oblivious to the actual event as it happened; I was thousands of miles away, in another hemisphere, on a slick, mossy corduroy path, photographing bromeliads, bamboo, palms and flowers in 110 degree Amazon heat. No phone. TV. Radio. Just a guide, a few fellow travelers, a National Geographic photographer filming birds, native cooks preparing tropical delicacies like tiger catfish, and the chatter of colorful noisy macaws. I was soaked to the skin with sweat, reveling in the majesty of the towering rainforest.

In my photographic journal, I made a haunting notation: 9-11-01. Pink flower. 9 a.m. In the presence of such exquisite beauty, I was oblivious to the horror unfolding to the rest of the world.

It was only a day later, when a supply boat made an unscheduled stop at our camp, that I learned what happened. The sketchiest of details. Almost no information at all. By lantern light, beneath a thatched roof with the night sounds of the jungle around us, a small group of us, from the USA, England, Germany and Australia, scanned the pictorial front page of a damp Peruvian paper. Everything in the Amazon was damp.

La Guerra. The headline spread from edge to edge. Big block letters. Superimposed over a picture of President Bush flanked by the burning, smoke-spewing towers. Long on image; short on detail, and none of us fluent in Spanish. Our guide and a teacher helped translate the meager news. As far as we knew, a war had started. We were ahead of ourselves. As we slowly comprehended the enormity of it all, firefighters (above right) were deep in debris, trying to save lives, sometimes at the expense of their own. I sat in the rainforest and wrote.

“We still have no information on the terrorism. It is as if we are in a microcosm, a sanctuary cut off from the world. Our sanctuary is also our oasis from the horror… there is great peace here, and and expectation to live simply and simply live. We could learn much from these old but far from simple people. This Amazon has much to teach us, and is a great leveler.” 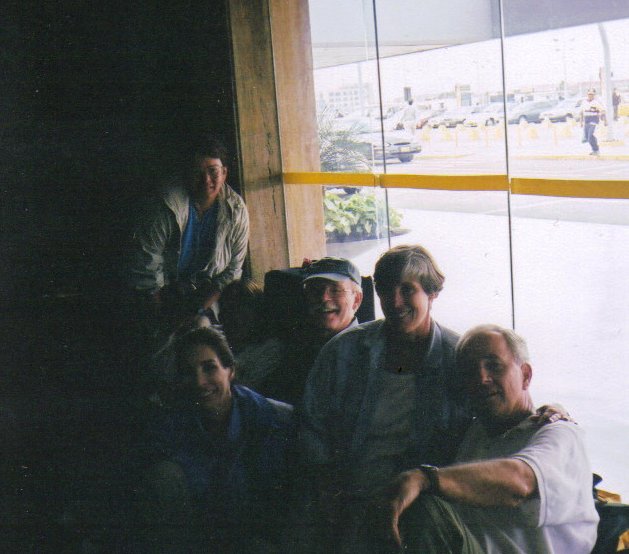 It was only at the end of the week, at the Chavez Airport in Lima, that we learned about the true enormity of death and destruction. Horror-stricken, my companion and I joined thousands of tourists now calling the airport concourse home. For days. Cancelled flights, poor communications, worried relatives. Army tanks outside the plate glass windows, flags at half mast, soldiers in heavy boots marching back and forth through the airport with assault weapons at the ready. American Airlines in frazzled disarray. We huddled in shadowy corners, sleeping on marble floors, piled up against each other and our luggage (above left). Not knowing — anything.

There were no newspapers or magazines; TVs had been removed. A single computer in a small phone booth area could be rented for 30 American cents an hour; we collected messages and addresses, booked the computer for an hour at a time, and held the places in line for those who made the necessary internet connections and bulk-emailed messages for everyone else. Mass e-mailings. Short messages. “What’s happening” and “We are okay, just stranded.”

To this day, despite having made the pilgrimage to the Mecca of ground zero, I still feel a disconnect from the events of that week. I always will, I guess. I didn’t live through it, was not saturated with the immediacy of news coverage, didn’t have a clue of its enormity.

I was moving in a different world, an isolated world of peace, beauty, spirituality and the most basic living, in tandem with natives who still travel hundreds of miles over rivers in dugouts just to see a single doctor in a ramshackle shed or a shaman with a healing garden. A different world. One without such weapons of mass destruction.

I don’t diminish what happened in New York City; not by any means. There are no words that will ever completely describe it. The absolute horror of it.

But today, even as many Americans mourn, even as many question some of the events of that day, even as we fight the wrong enemy in the wrong country while the true instigators remain untouched and taunting us, even as our soldiers continue to die in this “retaliatory” fight based on untruths, we must take a moment to mourn. A moment of silence. Not just for the dead in the towers. But the dead in Iraq — women, children, elderly, innocents and our soldiers. A moment of silence to think about what the right response is, or should be.

The numbers didn’t stop with the 3000 who died at Ground Zero.

The number of innocents slaughtered in Iraq can be measured in the tens of thousands and grows day by day.

The number of people whose hearts, minds and spirits and bodies are warped and twisted by war escalates; physical and mental trauma doesn’t recognize borders and number too many.

So we must take a moment to mourn.

And then we must move on.

For there are decisions to be made, political and social battles to be fought, and a country or two and thousands of people to be mended. We have been fiscally and emotionally and politically bankrupted by the fallout from those first few hours of what should have been an ordinary workday on September 11.

My mother, in one of our many discussions about everything and anything some ten years before she died, once said of her own death, “Mourn as you must, but honor me most by continuing to live and be the best that you can be.”

Yes, we need to think about that. And what that “best” might be. And move on to achieve it.