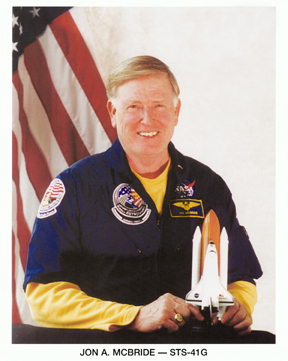 Retired Capt. Jon A. McBride will speak of his space exploration experiences at 5:30 p.m., Wednesday, Jan. 28 in the APSU Morgan University Center, ballrooms B and C. The public is invited to attend this event at no charge.  McBride’s appearance is sponsored by the APSU Govs Programming Council.

Selected as an astronaut candidate by NASA in January 1978, McBride became an astronaut in August 1979. His NASA assignments have included lead chase pilot for the maiden voyage of Columbia and pilot of STS 41-G, which launched from Kennedy Space Center on Oct. 5, 1984, aboard the Orbiter Challenger.

In May 1989, McBride retired from NASA to pursue a business career. He is currently a member of the Astronaut Encounter group at the Kennedy Space Center’s Visitors’ Complex. He also does limited consulting to business organizations and serves on several boards of directors and advisory groups.

For more information, contact Leslie Cragwall, coordinator of events and programs at APSU, by telephone at (931) 221-7431 or by e-mail at .