Holt, the Governors’ running back and record-setting kick returner, zigzagged his way 95-yards with a kickoff Saturday against UT Martin. It was his first kickoff return for a score this season and fourth of Holt’s career. The 95 yarder is his career’s second longest. He had a 99 yarder against Murray State a year ago. 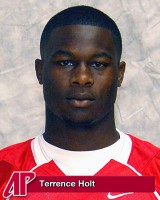 The purpose of the CFPA is to provide the most scientifically rigorous conferments in college football. Recipients are selected exclusively based upon objective scientific rankings of the extent to which individual players increase the overall effectiveness of their teams.