Clarksville, TN – Driving up Hwy 149 from Clarksville, one could smell the sweet aroma of something good cooking as you topped the hill. The 2nd Annual BBQ Cookoff was well underway at Hilltop Supermarket.  Turning into the parking lot, tents, grills, barrels and other means of cooking barbecue came into view.

Some of the contestants arrived as early as 5:00am to setup and begin preparing their barbecue. This year’s contest consisted of two categories: Chicken and Ribs. There was plenty barbecue to sample, as most of the contestants were also selling what they cooked. 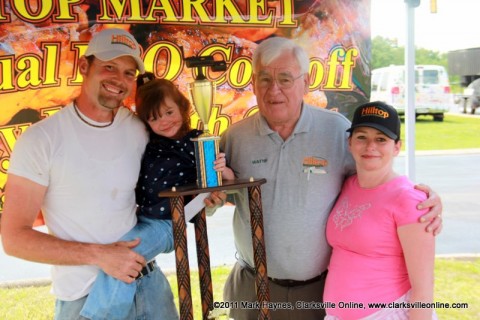 Manna Café Ministries was on hand manning the Cracker Boy Seasoning booth selling BBQ sandwiches and drinks. All proceeds from the sale of the sandwiches were donated to Manna Cafe. By the end of the day, alot of money had been raised for the charity.

“It’s good for us anytime we can be involved in community events like the BBQ Cookoff and Magic at the Museum.” said Kenny York, founder of Manna Cafe. “I would like to thank Hilltop Supermarket for having us out today and for all the things they do for us. They have helped us do six food drives at their store.”

Even some of the little ones were stepping up to help out Manna Cafe. Two young girls, Yuriko Wofford and her little helper Melody Johnson, had setup a lemonade stand right beside the BBQ Bunch cooking area. While their parents cooked, they were selling glasses of lemonade for .50 cents. All the money they raised was going to help Manna Cafe.

“I just like helping people out.” stated Yuriko. “It’s fun!”

“I like helping too!” said Melody, as she cleaned up some lemonade that had spilt onto the stand. I bought a glass before I left them and I have to say they were serving some good lemonade.

Despite being an overcast day, there was a good turn out for the event. Over 300 people came out to enjoy good food and to watch the contestants cook and prepare their entries for the judges. A light noon shower thinned the crowd down some right before judging time. 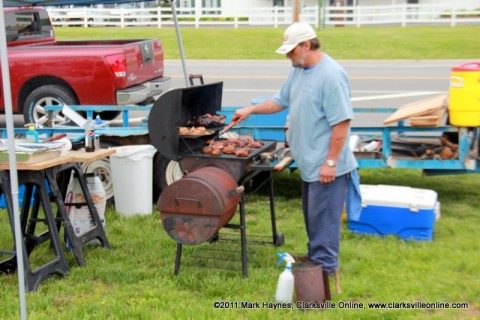 One of the contestants cooking chicken for his entry into the BBQ Cookoff.

There were 10 teams for the event. Each team could have up to 4 people with 1 head cook. The names of the teams for this years event were: Cumberland City BBQ, Double A’s, Baganelly, Southside Cripplers, Goolinghorn Gang, Lallo & Wickham, BBQ Bunch, Smokin’ n Turnin, Big B’s and BBQ Construction.

Each team had to provide the judges at least 6 separated portions of meat. Each entry had to be turned in 10 minutes before judging time for that category. Each entry was numbered so the judges would not know who they were judging. Chicken was judged at 12:30pm and the ribs at 1:00pm. 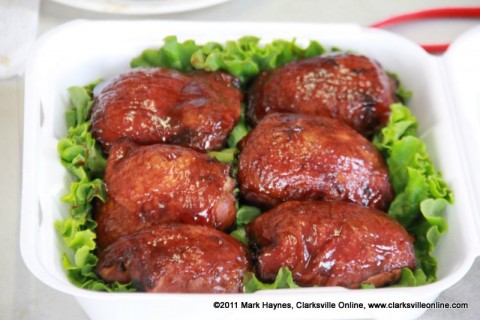 A chicken entry in the BBQ Cookoff.

Judging was based on a point system from 1 to 10 (10 being the best). Each entry was judge for it’s taste, texture and appearance. Total points per entry determined the champion.

Entries were placed in the center of the table so all the judges could see in order to rate the appearance. Then each judge placed a sample on their plate. As the judging continued, the judges were all smiles and making comments on how well they liked each entry that came by.

When it came time for the ribs, they were a person short, so they asked me to help judge. After much deliberation (like one second), I decided to do my civic duty, step up to the plate and judge a barbecue rib contest. I sat down and took my place at the judges table. Pencil in hand, I awaited the first entry. 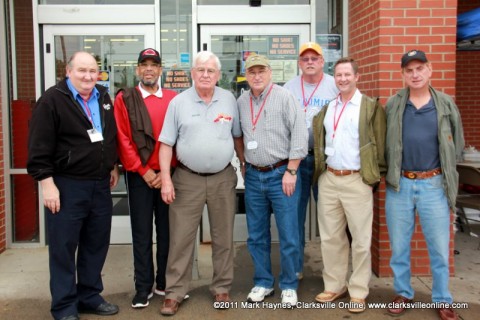 The first entry was placed at the center of the table and opened. Within, nestled on a bed of fresh curly parsley, was a set of ribs that looked so tender and moist that they glistened in the light. Once everyone had a good look and had judged the appearance, sample pieces were placed on our plates. 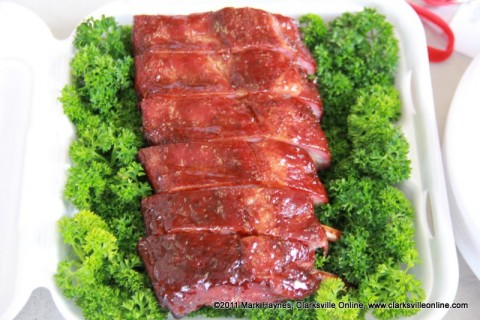 A rib entry in the BBQ Cookoff.

I have to say these ribs did not disappoint. From the first bite, they were juicy, tender and oh so flavorful. They were do good, I was thinking to myself “They have brought out the best ribs first.” My thoughts were stated aloud by a few of the other judges.

However, as the second, third and fourth entries were passed around, it became quite clear that this contest would not be that easily won. Each entry had it’s own uniqueness. It’s own character. The flavors varied from hickory to a sweat honey to one that was even mildly hot. Everyone just about as juicy and tender as the last. There was one entry that was the tenderest ribs I have ever had. It left me wondering how they accomplished that, but I’m sure that team’s not telling. 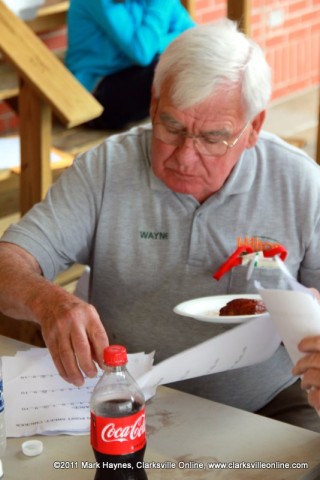 Wayne Hall, owner of Hilltop Supermarket, was one of the judges.

The garnishments used to complement the appearance of the ribs varied from beds of whole leaves of fresh green lettuce, curly parsley, flat leaf parsley, cilantro, red peppers, tomatoes and even pickles. The pickles were a big hit with the judges. I thought a fight might break out over who got the last one.

At one point during the judging, Wayne Hall, owner of Hilltop Supermarket, pushed back from the table some, gave a satisfied sigh and said “All these entries have been so good that I’ve about stuffed myself. I think when this is over I will have to go home and take a nap.”

As the last entry was judged, and the score sheets turned in, there was an air of disappointment that it was over and there were no more entries to be judged. “Let’s start up a third round of judging guys!” announced Chuck Edwards, host of The Spirit of Clarksville on WJZM 1400 AM. “I’m sure we can get the contestants to send over more food, I mean entries to be judged.”

Once the scores were tallied, it was time to move to the awards tent. For each of the categories, chicken and ribs, there was a 1st, 2nd and 3rd place trophy along with a cash prize.

For the category of chicken, the winners were:

For the category of ribs, the winners were: 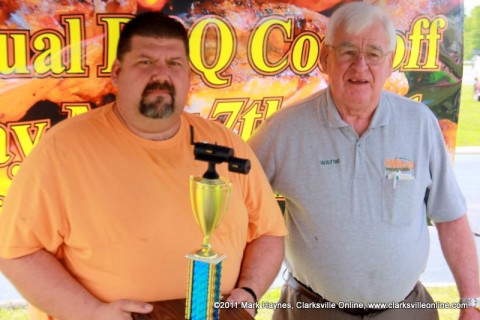 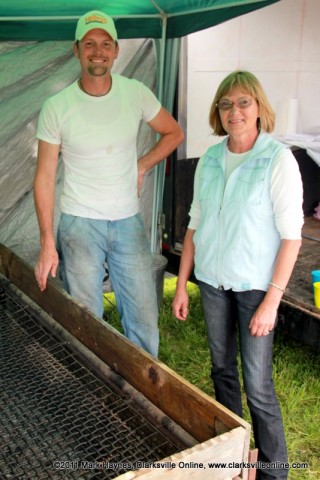 Mike Johnson and Elkie Melton standing next to the BBQ pit used to cook the championship ribs.

After the awards ceremony, I met up with the BBQ Bunch who won 1st in ribs and 2nd in chicken. Mike Johnson was in charge of barbecuing the ribs. I asked him what was his secret to making award winning ribs. “All I can say is it comes down to old school barbecuing.” stated Mike Johnson. He then showed me the portable BBQ pit used to cook the ribs.

Elkie Melton was in charge of cooking the chicken for the team, which came in 2nd place. “This event was fun to participate in.” stated Melton. “I am looking forward to doing this again next year!”

As I walked away, I could hear the BBQ Bunch making plans for next year. Already deciding who would move to pulled pork and who they could get for brisket.

I want to thank Hilltop Supermarket for putting on this event as well as letting me judge. I especially like that fact that the judges got to take the leftovers home. I will eat like a King for a week. I had 9 containers of ribs and chicken to get to the car with. Along the way, I got another lemonade as well as a BBQ sandwich from Manna Cafe to eat on the way home.

For those that missed this event, you missed some of the best BBQ around. Mark your calendars for next May and watch Hilltop’s website for details, because you do not want to miss this event next year.

What is Manna Cafe Ministries? In a nutshell, MCM is the realization of a God-given dream that entails feeding, loving, and nurturing the poor and homeless.

What makes MCM unique is its mobility. Meals are served and food is distributed from various locations throughout the community. MCM is committed to going to where the need exists.

During the week, MCM distributes food boxes to those in need from the Manna House at 1319 East Franklin Street. They also conduct Mobile Pantries (in conjunction with Second Harvest Food Bank), during which they give away a trailer truckload of food from a single location on a Saturday afternoon. For more about the Mobile Pantry, see the Food Pantry/Mobile Pantry page.