Washington, D.C. – Acetaminophen, a fever and pain reliever that is one of the most widely used medicines in the U.S., can cause rare but serious skin reactions, warns the Food and Drug Administration (FDA).

Although rare, possible reactions to acetaminophen include three serious skin diseases whose symptoms can include rash, blisters and, in the worst case, widespread damage to the surface of skin. If you are taking acetaminophen and develop a rash or other skin reaction, stop taking the product immediately and seek medical attention right away. 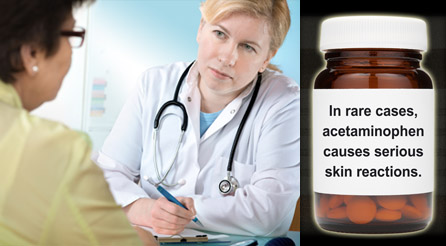 If you’ve ever had a skin reaction when taking acetaminophen, don’t take the drug again and discuss alternate pain relievers/fever reducers with your health care professional.

Used for decades by millions of people, acetaminophen is the generic name of a common active ingredient included in numerous prescription and non-prescription medicines.

Tylenol is one brand name of the pain reliever sold over the counter, but acetaminophen is also available as a generic under various names.

It is also used in combination with other medicines, including opioids for pain and medicines to treat colds, coughs, allergy, headaches and trouble sleeping.

“This new information is not intended to worry consumers or health care professionals, nor is it meant to encourage them to choose other medications,” says Sharon Hertz, M.D., deputy director of FDA’s Division of Anesthesia, Analgesia and Addiction. “However, it is extremely important that people recognize and react quickly to the initial symptoms of these rare but serious, side effects, which are potentially fatal.”

Other drugs used to treat fever and pain, such as nonsteroidal anti-inflammatory drugs including ibuprofen and naproxen, already carry warnings about the risk of serious skin reactions. Advil and Motrin are among the common brand names that include ibuprofen as an active ingredient. Aleve and Midol Extended Relief are among the best-known brand names that include naproxen as an active ingredient.

On OTC medicines, the word “acetaminophen” appears on the front of the package and on the Drug Facts label’s “active ingredients” section. On prescription medications, the label may spell out the ingredient or use a shortened version such as “APAP,” “acet,” “acetamin” or “acetaminoph.”

Stevens-Johnson Syndrome (SJS) and toxic epidermal necrolysis (TEN) are the two most serious skin reactions linked in rare cases to acetaminophen. They usually require hospitalization and can cause death.

Problems usually begin with flu-like symptoms followed by rash, blistering and extensive damage to the surfaces of the skin. Recovery can take weeks or months, and possible complications include scarring, changes in skin pigmentation, blindness and damage to internal organs.

A serious skin reaction can occur at any time, even if you’ve taken acetaminophen previously without a problem. There is currently no way of predicting who might be at higher risk.

If you’ve ever had a skin reaction when taking acetaminophen, don’t take the drug again and discuss alternate pain relievers/fever reducers with your health care professional.

Prior to deciding to add a warning about skin reactions to products containing acetaminophen, FDA reviewed medical literature and its own database, the FDA Adverse Event Reporting System (FAERS).

A search of FAERS uncovered 107 cases from 1969 to 2012, resulting in 67 hospitalizations and 12 deaths. Most cases involved single-ingredient acetaminophen products; the cases were categorized as either probable or possible cases associated with acetaminophen.

A small number of cases, just over two dozen, are documented in medical literature, with cases involving people of various ages.

FDA has examined—and continues to examine—acetaminophen for safety issues, just as it does with all approved drugs. The warning comes two years after FDA took new steps to reduce the risk of liver injury from acetaminophen.

The agency continues to consider the benefits of this medication to outweigh the risks.

“FDA’s actions should be viewed within the context of the millions who, over generations, have benefited from acetaminophen,” says Hertz. “Nonetheless, given the severity of the risk, it is important for patients and health care providers to be aware of it.”

This article appears on FDA’s Consumer Updates page [3], which features the latest on all FDA-regulated products.