The Governors shot a final-round 289 to finish at 862, five strokes better than runner-up Marshall. Host Cincinnati was third at 871.

The Governors entered the final round two shots behind Marshall (571) and took advantage of a Thundering Herd disqualification to pull ahead at tourney end.

“It is phenomenal feat to win a tournament like this three straight times,” APSU coach Kirk Kayden said. “The 862 was the best score have ever had in the tournament—five strokes better than last year.

“Although we were one-over (289) in the final round, overall we just had good, solid performances for the tournament. It was a complete team effort. Everyone contributed rounds.”

APSU senior Anthony Bradley, who struggled all day with his swing, overcame a second-round 75 to shoot a 2-under 70 to finish at 214 and fifth, his fourth straight Top 10 finish this fall.

Senior Trey Tarpley enjoyed his tourney’s finest round also in the final 18, matching Bradley’s  70, for a 217, tying him for eighth.

A third senior, Marco Iten finished sixth in the tourney, shooting a closing round 73 to end with a 215.

Sophomore Chris Baker had the Governors’ other counting score, Tuesday afternoon, with a 76. However, it was the Govs’ other sophomore, Austin Kramer, who proved solid in the first two rounds, shooting 3-under (70-71) before struggling to a 79 in Tuesday’s final round. 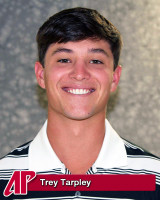 This was APSU’s first 2013-14 tourney title after tallying a school-record best six a year ago. It also was the 17th straight tournament the Governors have finished in the Top 5.

“It was a good win for these guys,” Kayden said. “We got some confidence and some momentum to take into our last fall tournament, our own tournament (F&M Bank APSU Intercollegiate) next Monday and Tuesday.”