Austin Peay (1-4) only trailed South Alabama — currently ranked 20th in the nation in the ESPN.COM/USA Softball Collegiate Top 25 Poll — 2-0 heading into the bottom of the third inning, but saw things turn bad quickly.

Julie Moss would reach on an infield single and move to second when Kaitlyn Griffith walked.

Chloe Rathburn would follow with the Jaguars (5-0) second infield single of the inning, with Moss coming around to score, to make it 3-0, on an error by Lady Govs shortstop Kayla Davidson, who threw the ball wide on a failed flip attempt to get Griffith at second base.

A wild pitch moved both runners up a base followed by a single by Alex Breeden to dive two more runs to make it 5-0. 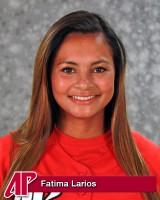 A second error by Davidson in the inning followed then a fielder’s choice and a walk to bring in the sixth run.

The final two South Alabama runs in the third came in by way of a fielder’s choice and an infield ground out, giving the Jaguars six run in the inning and an 8-0 lead.

The Jaguars would add on four more runs in the bottom of the fourth inning, highlighted by a two-run triple by Amanda Minahan.

On offense, the Lady Govs did threaten a couple of time to push runs across the plate, but couldn’t come up with the big hit.

In the second inning, senior Lauren de Castro – who was the lone Lady Gov to be named to the all-tournament team — opened the inning by drawing a walk and move into scoring position by stealing second base.

de Castro would move over to third on a groundball out by freshman Sidney Hooper, but the Jaguars got freshman Vinchenza DiBenedetto to ground out to end the threat.

But the best scoring chance for Austin Peay came in the top of the third inning, when freshman Fatima Larios opened the inning with an infield single and moved to second when sophomore Courtney Brower drew a walk.

An out later, junior Laurel Burroughs walked to load the bases with just the one out and the Lady Govs number three and four hitters coming up.

But fifth-year senior Kristin Whitmire strikeout looking and de Castro fouled out to the catcher to strand the three runners on base.

Austin Peay returns to action on Wednesday, as they travel to Birmingham, AL, to face former Ohio Valley Conference member Samford University in a doubleheader starting at 4:00pm.