Paducah, KY – Fighting tooth and nail to the last, Austin Peay State University men’s tennis team saw its season come to a close with a 4-2 loss to Belmont, Friday, in the Ohio Valley Conference Tournament semifinals at Heflin Tennis Center.

Austin Peay (13-6) saw its season end in the semifinal round for the third time in the last five seasons.

After such a strong showing in doubles play Thursday, the Govs struggled in pairs play against Belmont. 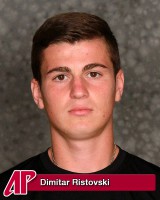 While Dimitar Ristovski and Iago Seffrin were victorious at No. 2 (8-5) to run their winning streak to four matches, the top and bottom pair of the Govs order suffered defeats, Friday.

Freshmen Manuel Montenegro and James Mitchell were overrun at No. 3 (8-2) by Hans Nardelli and Martijn Verberne, while senior Jasmin Ademovic and junior Aleksas Tverijonas dropped a hard-fought effort against Marko Lovrinovic and OVC Player of the Year Mauricio Antun, 8-5. 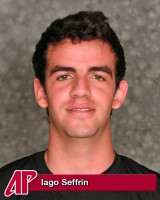 The Govs’ freshmen split their matches at No. 5 and No. 6 singles, with Mitchell falling 6-1, 6-1 to Henrik Claesson. Montenegro won the first set 7-5 before Verberne was forced to retire due to injury.

Seffrin’s win at No. 4 drew the match even at two points a side. The Brazilian rallied back from a dismal Thursday showing for a 6-2, 6-2 win against Nardelli, and finished his season with wins in nine of his last 10 singles matches.

Unfortunately, the Govs top two would fall in the same match for just the fifth time in 2014. In his final match as a Gov, Ademovic gave the conference player of the year all he could handle before falling 6-4, 6-4.

He could only watch as minutes later, Ristovski – who earned the clinching victory for the Govs in last season’s OVC Championship match against the Bruins – dropped his No. 2 match to Lovrinovic 7-5, 6-2.

With two all-conference players returning, head coach Ross Brown’s squad will be on the short list of contenders once again next season.