The honor is the first of Basch’s career and the first by an Austin Peay track athlete since Carrie Burggraf (first team) and Shamai Larsen (second team) were honored in 2010.

Basch graduated earlier in May with a degree in psychology after earning a perfect 4.0 grade-point average during her collegiate career.

She also was awarded the track and field Scholar-Athlete honor, her second in as many years. Basch also earned the Governors Club Academic Achievement Scholarship following her junior year. 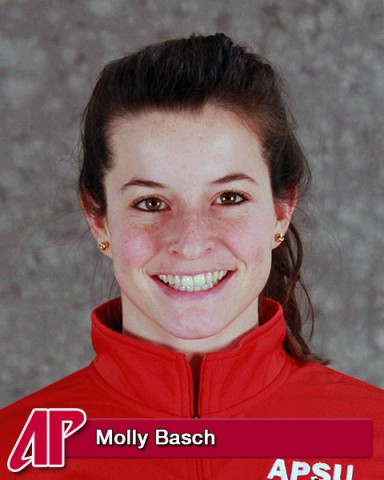 In her final season in an Austin Peay uniform, Basch set personal-bests in both indoor (3.22m) and outdoor (3.53m) pole vault. She won the Battle of the Cumberland, April 22nd, and earned points at both the Ohio Valley Conference Indoor (eighth) and Outdoor (fifth) Championships.

“This is obviously a great award for Molly,” said head coach Doug Molnar. “It speaks to the kind of student-athlete she was for us. She brought the same commitment every day to her work in practice and in the classroom. We’re very proud of her and what she was able to accomplish.”

In May, Basch earned Academic All-District III honors from CoSIDA for the second time, which put her on the All-American ballot. CoSIDA began the Academic All-America program in the 1950s and has honored thousands of deserving student-athletes from numerous sports across the country in all divisions. Capital One became official sponsor of the program in January 2011.