Clarksville, TN – Scoring touchdowns on five of its six first-half possessions, September 5th, Rossview High School not only picked up its first win of the season; but also retained the Warfield Shield with a 48-3 District 10-AAA victory over Clarksville High School.

It wouldn’t take long for the Hawks (1-2, 1-0 District 10-AAA) to start their night’s scoring, as they took their opening possession right down the field, 80 yards on six plays, with Isaiah Johnson going in from five yards out to put Rossview up 6-0 just 1:44 into the game – after the extra-point attempt was no good after hitting the upright. 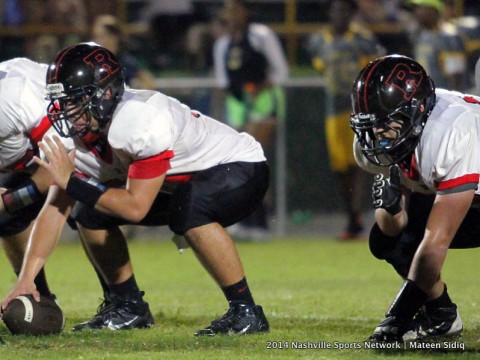 Johnson would finish the night with 223 yards rushing, on 17 carries, and scoring three touchdowns.

After a three-and-out by Clarksville High (1-2, 0-1 District 10-AAA) on its first drive of the night, Rossview would put together a 10-play 58-yard drive for its second touchdown of the opening quarter – this time with Bobby Lenor scoring on an 18-yard run to give the Hawks a 13-0 advantage after one quarter of play.

Clarksville High had a chance to cut into the Rossview lead early-on in the second quarter, with Antone Gallion recovering a Johnson fumble at the Hawks 45-yard line, with 10:39 left in the opening half.

But a holding call on a 20-yard run by Wildcats quarterback Kyle Sickel — that would have given Clarksville High a first down inside the Rossview red zone — put the ball back on the 43 and ending up stalling the drive that ended on downs.

Rossview would put the game way after that, scoring on its next two drives – in a span of just 4:03.

Johnson scored on a 38-yard run, followed by a two-point conversion run by Lenor, while Tristin Luke scored from 12 yards out – after Dillion Johnson recovered a Wildcat fumble at the CHS 31.

Rossview would close out the first half with an exclamation point, with Dominic Stancescu being on the receiving end of a scramming 80-yard catch-and-run for a touchdown with just 21.8 seconds left for a 35-0 halftime advantage for the Hawks.

With a running clock in the second half, under the TSSAA mercy rule, Rossview would score the only points of the third quarter on its first possession of the second half, with Johnson breaking away from the Wildcats defense for a 74-yard touchdown run and a 42-0 advantage after three quarters.

Clarksville High would finally get on the scoreboard on the first play of the fourth quarter, with Mason Gasaway hitting a 34-yard field goal, before the Hawks closed out the night’s scoring with a Qualyn Leding 28-yard TD run, with 3:03 left in the game for the 48-3 final.

Both teams step back out of district play for their next action on September 12th, as Rossview plays host to Stratford High School, while Clarksville High travels to Centennial High School.

Both games are scheduled to kickoff at 7:00pm.