May is Stroke Month

Dallas, TX – You don’t need superpowers to be a hero when it comes to stroke, you just need to pay attention to the risk factors and know the warning signs.

For American Stroke Month this May, the American Stroke Association’s Together to End Stroke™ initiative, nationally sponsored by Medtronic, offers five things everyone should know to be a Stroke Hero. 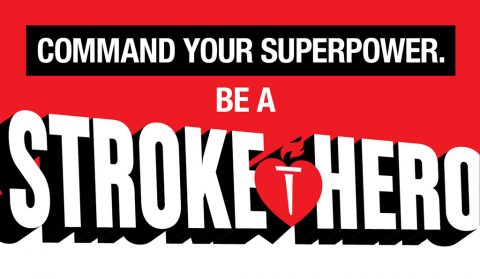 1. Anyone Can Have a Stroke (Even Superheroes) – Some stroke patients don’t “look the part” and they may not have a traditional stroke risk factor like high blood pressure. Stroke is more common in older people, but young adults, teens, children and even babies can be victims.

2. High Blood Pressure is Public Enemy # 1 for Stroke – About 80 million Americans have high blood pressure, yet about half with the condition do not have it under control. Three out of four people who have a first stroke report blood pressure higher than 140/90 mm Hg, making blood pressure the most important controllable risk factor for stroke.

3. Stroke Targets by Color – While stroke is a leading cause of death for all Americans, African-Americans are at an increased risk. Blacks are nearly twice as likely to have a stroke compared to whites, and more likely to have it at a younger age.

4. Stroke is Largely Treatable – Clot-busting drugs and medical devices like stent retrievers have made stroke largely treatable, but most patients need to get to an appropriate hospital to be evaluated and treated within 3 to 4.5 hours of the first symptom. With nearly 2 million brain cells dying every minute during a stroke, there’s no time to phone a friend or take a nap. Calling 911 is the best call for stroke.

5. Friends Usually Save Friends from Stroke – You’ve heard the saying “fast friends”. If you’re having a stroke, that’s exactly who you need nearby. Two out of three times, it’s a bystander making the decision to call 911 or seek treatment on behalf of someone suffering a stroke. To remember the most common stroke warning signs and what action to take, learn the acronym F.A.S.T. If you see F-Face drooping, A-Arm weakness or S-Speech difficulty, it’s T-Time to call 911.

The American Stroke Association, a division of the American Heart Association, launched Together to End Stroke™ with inaugural sponsor Covidien, now Medtronic, in 2013 to elevate the message that stroke is largely preventable, treatable and beatable. 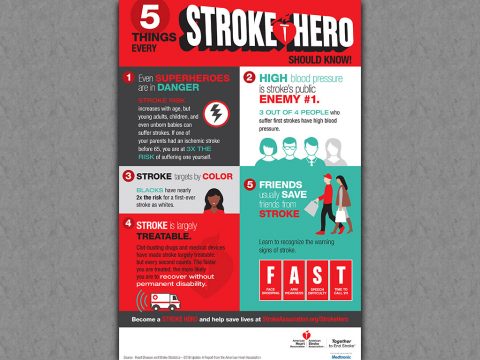 “Like the American Heart Association and American Stroke Association, Medtronic is committed to improving the lives of stroke patients,” said Brett Wall, president, Brain Therapies, Medtronic. “Over the past three years, Together to End Stroke™ has helped boost stroke warning sign recognition, which leads to more people getting to treatment in time. We are happy to continue our support of this important initiative to raise awareness of stroke.”

About the American Stroke Association

The American Stroke Association is devoted to saving people from stroke — the No. 2 cause of death in the world and a leading cause of serious disability. We team with millions of volunteers to fund innovative research, fight for stronger public health policies, and provide lifesaving tools and information to prevent and treat stroke. The Dallas-based association was created in 1997 as a division of the American Heart Association.

To learn more or to get involved, call 1.888.4STROKE or visit StrokeAssociation.org