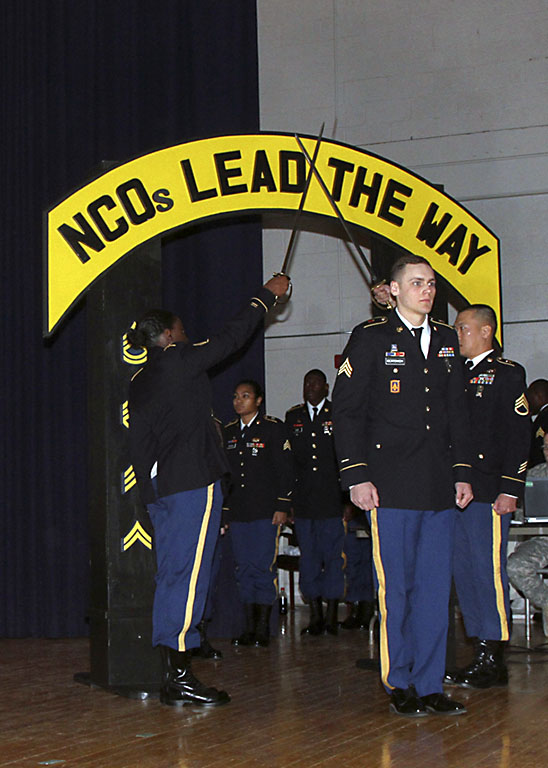 Fort Campbell, KY – The newly promoted Lifeliner NCOs walked on stage through a golden arch, symbolically representing their transition into the Corps of Noncommissioned Officers. The Soldiers shared this important moment in their careers with their peers, leaders, friends and family members.

“We have to recognize the transition of these individuals and get [these new NCOs] to understand what it means to be a noncommissioned officer, and this is a great way to start their journey,” said Norman.

The transition from junior Soldier to NCO comes with a lot of responsibility for both the individual and their families because now they are now entrusted with the welfare of their Soldiers and their Soldiers’ families, said Norman.

It’s extremely important for families to witness their Soldier’s induction because they play a crucial part in their promotion and will continue in their Soldier’s progression among the ranks, added Norman.

“This promotion isn’t just for [the Soldiers], but for their families who supported them along the way as well,” explained Norman. “Through helping them study for boards, taking care of the kids or simply supporting them through stressful times, it comes down to their support making it possible.”

At the age of 21, Sgt. Travis Bertovich was the youngest of the 20 NCOs to be inducted in the ceremony.

“It’s a huge honor [to be inducted into the corps],” said Bertovich, who earned his promotion in January. “I have had some great NCOs who have helped me along the way – from this recent deployment, to going to the board, and getting through [the Basic Leader Course].”

Bertovich said he has certain leaders he hopes to emulate through his journey as an NCO and will lead and mentor his Soldiers the way he asked his NCOs to lead him as a young private and specialist.

Although his family wasn’t able to attend the ceremony, Bertovich said most of the leaders who have helped him through his journey to become an NCO attended.

“Most of my past leaders have left the Army, but my current leaders were able to make it to the ceremony, and that meant a lot to me because without their support, I wouldn’t be here today,” said Bertovich. 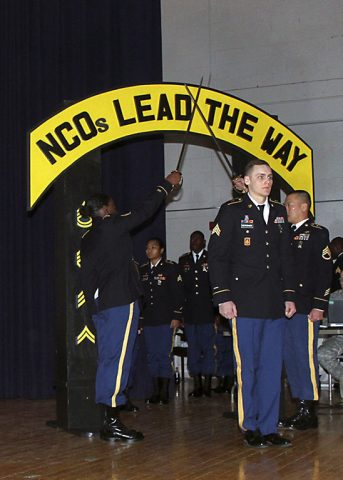 “It’s an honor to have witnessed him grow from a young Soldier to an NCO,” said Wood. “I think it’s important to conduct these ceremonies because it shows them that all their hard work and dedication has paid off.”

Wood said he has been Bertovich’s first line supervisor for over a year and is extremely proud of how he has developed as a leader and knows he will be a great addition to the NCO corps.

Toward the end of the ceremony, Bertovich stood in front of his newly inducted peers and initiated the Creed of the Noncommissioned Officer.

The theater echoed as every NCO present recited the creed and ended it with a thunderous “we are professionals, Noncommissioned Officers, leaders!”