Since arriving at Austin Peay after transferring from Darton State, Tidwell has emerged as one of the lineups most consistent threats.

In addition to leading the Govs in stroke average (73.9), all 25 of Tidwell’s rounds have counted toward the Governors final tally in all nine tournaments he has appeared in.

Tidwell went on quite the roll in the middle of his first season in Clarksville, posting six consecutive top-20 finishes—most by a Governor since Marco Iten’s historic 2013 campaign. 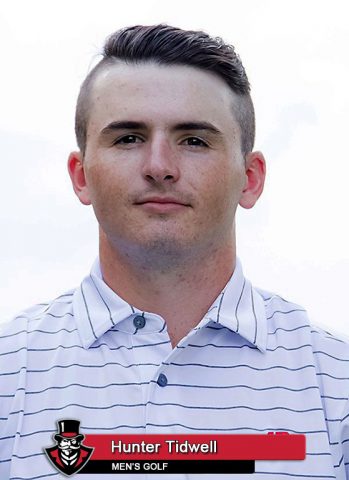 He capped that run with a season-best fourth-place finish at the Bobby Nichols Intercollegiate, tying for fourth thanks to a final-round 68—equaling freshman Alex Vegh for the best final-round score by a Gov in 2016-17.

“Hunter’s been consistent for us all year,” said head coach Robbie Wilson. “Being a transfer into this conference, he’s made his mark already and we’re looking forward to even better things in the future. The sky’s the limit for him.”

Tidwell, who posted an outstanding opening day with a two-under 70 to earn a share of fourth after the first round of the 2017 OVC Men’s Golf Championship, will lead the Govs back onto the course tomorrow, with tee off set for 9:40am (CT).