Clarksville, TN – In 2003, during the opening months of the Iraq War, a young Fort Campbell soldier drove his Humvee over a hidden antitank mine. The resulting explosion covered more than a third of his body and face in burns. Many wondered if he would survive his injuries. 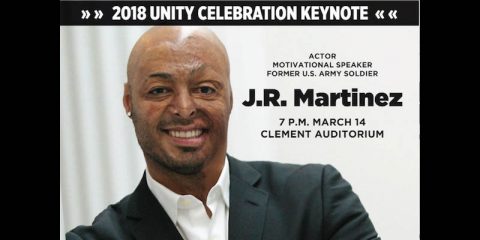 Fifteen years later, that young soldier—J.R. Martinez—is an international celebrity, having written a best-selling book, “Full of Heart,” starred on the daytime drama, “All My Children,” and won the 13th season of “Dancing with the Stars.” Martinez is also a popular motivational speaker and advocate for wounded U.S. Army veterans, and at 7:00pm on March 14th, 2018 he will deliver the keynote address at Austin Peay State University’s 2018 Unity Celebration.

That event, which is free and open to the public, will take place in Clement Auditorium on campus.

Back in 2003, after being trapped inside a burning Humvee, Martinez was transported to Germany and placed in a medically induced coma for three weeks.

“When I came out of my coma, the first words to my mother were, ‘See, I told you they couldn’t stop me,’” he said during a 2011 interview on The Ellen Show.

Martinez also has been featured on The Oprah Winfrey Show, 60 Minutes, The View, The Tonight Show, Good Morning America, CBS Nightly News, CNN, Fox, HLN, and Univision. He narrated the CNN documentary series “In America: Vets Wanted?” In 2013, he was a guest host on The View. He was also the host of the J.R. Martinez Show on KFI AM 640 in Los Angeles, one of the most popular talk radio stations in the country.

He has been featured in the Los Angeles Times, the Washington Post, the New York Times and US Veterans Magazine. He was on the cover of People Magazine for its annual Sexiest Man Alive issue, and he also was named one of the magazine’s Most Intriguing People of 2011.

For more information about Martinez or the Unity Celebration, call the APSU Office of Student Affairs at 931.221.7341.